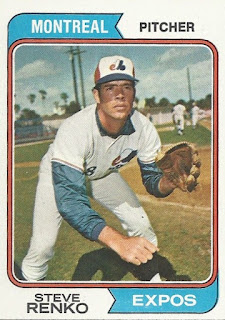 Steve Renko looks huge in this picture which I am pretty sure is in the same park as the earlier Ken Singleton shot, just in a nicer part of the park. Steve WAS a big boy, going 6'5" and he put that frame to good use during the '73 season, posting career bests pretty much across the board while leading a Montreal team in wins that came a hair away from winning the division. In this photo the field actually looks quaint with the picket fence and the telephone poles in the background. Where did the Expos play spring training ball - in somebody's front yard?

Steve Renko was a Kansas boy, and after high school attended the eponymous university where he was, among other things, Gale Sayers' quarterback. He topped out in that role his junior year as the starter - with Sayers in the backfield, Steve threw a grand total of 86 passes all season - as the team went 5-5. The "other things" were a year of hoops as a freshman - ten points and six rebounds per game - and on the mound and first base in baseball where as a senior he posted a 0.99 ERA and hit .344.Those numbers got him noticed by the Mets who in '65 made Steve a 24th round pick. Actually drafted for his stick, Steve hit .290 in Rookie ball that first year. But he followed that with a poor split season  between A and Double A season in '66 - a combined 165 strikeouts in 441 at bats - which pretty much forced the notion of pitching on him the following season. To be fair, he must have had an enormous strike zone. He stared well in '67, going 8-1 with a 1.61 ERA in the rotation while still playing a bit at first (he hit .218 with ironically much better K numbers). Then a '68 split between Double A and Triple A level resulted in an 11-12 record with a 3.21 ERA was followed by a terrible partial season at Triple A before Steve was part of the trade that brought Donn Clendenon over from the Expos in mid-'69.

Despite his early numbers, Renko  immediately moved into the Montreal rotation. A decent rookie year was followed by an elevated ERA in '70  and by a pretty good '71 in which Steve would tie his lifetime high in wins. By the end of that year he was the rare Expo starter with a career winning record. Things went south in '72, however: he went 1-1 his first two starts but in a combined twelve innings he allowed 15 walks and only five K's which was a portent for the rest of the year. Lots of runs came and in the second half he spent most of his time in the pen. After his big bounce in '73, Steve went a combined 18-28 the next two seasons with an ERA just over 4.00 as the Montreal fortunes sort of ebbed, partly because of that horrible Mike Torrez/Ken Singleton trade to Baltimore. Early in the '76 season, Steve went to the Cubs with Larry Biitner for Andre Thornton.

Renko played a bit more than a year for the Cubbies, spending the rest of the '76 season in the rotation and '77 as a spot guy, missing nearly two months that year to injury. That August he moved across town for Larry Anderson and went undefeated the rest of the year for the ChiSox in a great stretch run for him (though the Southside Hitmen were woefully short of other pitching and faded). Then it was off to Oakland with Jim Essian for Pablo Torrealba where Steve did an OK job for a rebuilding franchise before leaving as a free agent. Signed by Boston, he would stick with those Sox for two seasons, going a combined 20-18 in the rotation with an ERA just better than league average. In '81 he was part of the big trade that brought Fred Lynn back to the West Coast and for California went 19-10 the next two years. While his ERA got elevated that second year, he had a winning record but did not see any post-season action. He would move to Kansas City as a free agent for his final year and be done following the '83 season with a 134-146 record with a 3.99 ERA, 57 complete games, nine shutouts, and six saves. He ended up being a good hitter as a pitcher, finishing with a .215 average with six homers and had three seasons for Montreal in which he hit .270 or higher.

After playing Renko worked away from ball for over ten years, though I have no idea what he did. He then became a pitching coach for the next twelve, finishing with the Charleston Riverdogs in 2005. Since then he has apparently been retired. 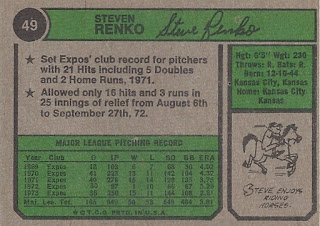 These are interesting bullet/star points since they completely ignore Steve's fine '73 season during which his ERA was over a run better than his career average. In '71 he also had 12 RBIs but it was not one of his better averages. Frankly, the second star only makes me think about how much he sucked the rest of the season; his ERA in the other games would have been well over 7.00. I will say that this guy on a horse would have been something to see. Steve has a couple sound bytes on the web and is a nuanced and thoughtful speaker with some great stories. His son played ball as well and had a long minor league career that reached Triple A. Steve was inducted to his school's hall of fame.

Let's make some good usage out of a bad trade:

I also could have gone through Rusty Staub, the guy Lolich was traded for, which would have taken the same number of steps.
Posted by wobs at 8:16 PM