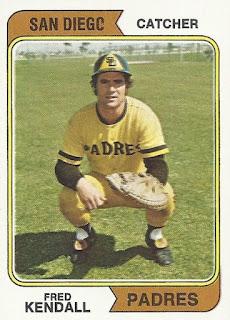 Here is Fred Kendall, Padres starting catcher and the subject of the second Washington Nat'l card of the set. Fred is fresh off his '73 season as San Diego's MVP. It was also Fred's best career season as he topped out in average, homers, and RBI's in what was pretty much his busiest year. Here he crouches at the Padres' spring training compound.

Fred Kendall was a '67 draftee of the Reds out of his Torrance, California high school as a catcher, but you know who was in front of him there. Though Fred lacked Johnny Bench's power, he had a couple decent offensive seasons, including a .301 in A ball his first year and a .292 in '68 in Double A. Following that season he was selected by San Diego in the expansion draft and  with his new team put up a very similar '69 in Double A with a bit more power prior to his late look. His next season was an error-less '70 behind the plate in Triple A. After some time at that level in '71 he moved into the starting Padre lineup late that summer.

Kendall's predecessors in San Diego weren't monster batsmen so even though his MLB average entering the '72 season was sub-.200, Fred was given a split starting assignment with recent transplant Pat Corrales. He turned in some nice D and on offense cracked that .200 barrier before taking on the job solo the next year. He retained the starting gig in '74 but as his average swooned 50 points, his at bats moved down. In '75 Fred's average again moved to sub-.200 as his at bats came way in to make room for the new young catching hope in Bob Davis. But Davis' stick wasn't too great either and Fred was staff ace Randy Jones' favorite receiver - Jones gave Fred a lot of credit for his pitching success in '75 and '76 - so in '76 Fred got a big jump in at bats as he reported a much better .246/2/39 offensive line. After the season Fred, Hector Torres,  and Johnny Grubb were sent to Cleveland for George Hendrick. 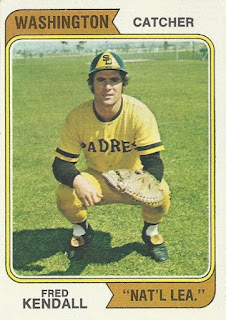 With the Tribe, Kendall moved into another split-role assignment - this time with Ray Fosse - and turned in numbers a bit better than his '76 ones. After that for the Indians he went to Boston - with Dennis Eckersley, oof! - for Rick Wise and other guys. He played very sparingly for the Red Sox, again for obvious reasons, and the next season returned to San Diego. After a couple backup seasons he was released in 1980. Fred finished with .234 average with 31 homers and 244 RBI's.

Following a few years with a real-world job, Fred returned to baseball as a minor league coach and manager in the White Sox system. In that second role from '92 to '95 he went 246-243. He then hooked up with former teammate Buddy Bell and became his bullpen coach for all his major league stops, the last being in 2007 in Kansas City. His son is, of course, Jason Kendall, currently with the Royals.

Some more poop on the whole Washington/San Diego situation might be appropriate here. Between low attendance woes and other business losses, San Diego's owner - CA Smith - got in dutch with the IRS, among other parties. He actively sought various deals, the most promising of which was a bid by a Japanese group to take the Padres to Washington. The city of San Diego sued to block the move; I do not know the outcome of that legal situation. But things were up in the air enough with Smith's finances that a move to DC seemed likely, at least enough to print those cards. In the end, of course, the Padres stayed in San Diego, becoming the property of McDonalds millionaire Ray Kroc. That was a pretty good save. 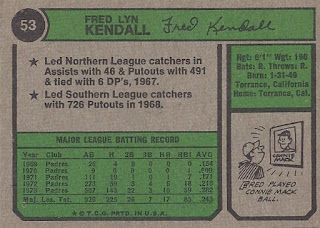 The card back focuses on Fred's primary strength, his fielding. The cartoon references the Connie Mack league which I always thought was strictly a northeastern rec league, but since Kendall was a California kid I guess not.

All NL this time:

We will see Jeter later in the AL.
Posted by wobs at 9:06 AM