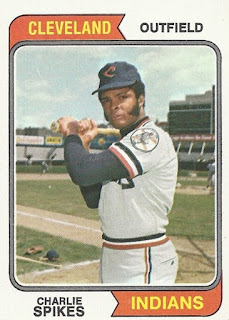 This is Charlie Spikes in his first solo card - he had a rookie card in the '73 set - at Yankee stadium. It is kind of an ironic shot because Spikes was traded the previous off-season from the Yankees as part of the deal that brought them Graig Nettles. Charlie was a big guy and prior to the '73 season there was much anticipation about the type of slugger into which he would develop. According to the Cleveland brass he was the piece that made the Nettles trade tolerable. And Charlie gave the Tribe a pretty good rookie season, leading the team in homers and RBI's. His average was a tad low - but so was just about everybody's on that team - and the strikeouts a tad high, but overall he seemed like a shot to deliver on his promise.

Charlie Spikes was drafted by the Yankees in the first round in '69 out of Louisiana, where he was a multi-sport star and in baseball a power-hitting third baseman. Charlie would be handcuffed a bit his first couple seasons in Rookie ball and then A ball by strikeouts but his power was pretty impressive and his base-running surprisingly so as those two years he stole 29 while getting caught only six times. In '71 at the higher level he dropped 40 strikeouts, added nearly as many points to his average, and became entrenched in his new position in the outfield. A fine Double A season in '72 followed during which he also stole 23 bases, sported a .400-plus OBA, and prompted a September call-up.

The big trade - Spikes, Jerry Kenney, John Ellis, and Rusty Torres for Nettles and Jerry Moses - was pretty interesting since the man that orchestrated it for Cleveland, Gabe Paul, departed as their GM right after the trade to become the Yankee GM. Given that the trade was a steal for the Yankees it was a bit suspicious at the time. Charlie had a nice rookie season becoming a starter right off the bat. The next season was better as he boosted his RBI total to 80 and his average 33 points. It would be his best season. In winter ball that year Charlie was nailed in the eye by a pitch and though he recovered it seems undeniable from his stats that the incident affected the rest of his career and the remainder of Charlie's time in Cleveland would be tough. Already one of the guys in Gaylord Perry's doghouse for his real or imagined loafing, Spikes withered under Frank Robinson's critical eye when the latter became the Indian manager. In '75 his average dropped back to the .230 level and his playing time decreased, most of it to rookie Rick Manning, a high-average (for a while at least) contact guy who was a much better fielder.  Charlie's home run total dropped to three in '76, his last season as a regular. In '77 Charlie was demoted to Triple A  and after a good partial season there that included a .293 average and seven homers and 31 RBI's in 164 at bats as well as a rediscovered ability to steal bases (for his minor league career he stole 86 while being caught only 16 times) he returned to Cleveland. But after a season off the bench the rest of the way that produced fewer than 100 at bats he went to Detroit for shortstop Tom Veryzer.

In Detroit Spikes reunited with his first MLB manager, Ralph Houk, and hopes were high that Charlie would regain his offensive footing. But at the top of the season he injured his knee and was assigned to Triple A for rehab. There he hit quite well - .320 with a .438 OBA - but in minimal at bats and after a bit of time in Detroit that produced discounted numbers, Charlie got knee surgery and was then released. Just prior to the '79 season he signed as a free agent with Atlanta. For the Braves Charlie enjoyed a bit of a revival as a pinch hitter, that year producing a .362,2/13 line with five doubles and a .423 OBA in 47 at bats. His '80 was also pretty good - a .294/0/2/.351 line in 34 at bats - but Charlie had only a two-year contract that was not renewed. In '81 he moved to Chunchi in Japan but was not too comfortable overseas and quit early that season. That was his last in baseball. For his career he hit .246 with 65 homers and 256 RBI's.

After playing Spikes returned to Louisiana where for a time he worked in a textile factory until a back injury put him on disability.

In the mid-'70's the Indians, like many teams, were pretty strapped for cash and decided to save money on transportation by moving from commercial airlines to a local commuter service. The planes were prop planes and since they were not pressurized they had to fly in the low heavier air, which meant two things. One was that the flights were much longer: a normal 90-minute flight would take three hours. Two was the planes could not fly above the weather. Once in '76 the plane on which poor Charlie was traveling was struck by lightning. Apparently by the time the plane landed, he and several other Indian passengers were curled into fetal positions. No wonder the guy's stats took a hit! 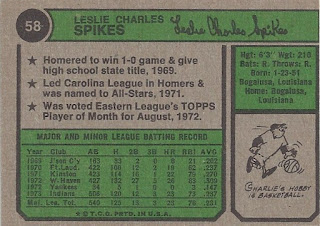 Leslie is Charlie's real first name; he opted for the middle one for I think obvious reasons. He had a nice compact signature; it leans to the left which is odd for a right-hander. This is also the second time we have seen that - maybe it was a thing back then. He hit 22 homers in '71. I cannot grab his August '72 stats, but his whole season was pretty good. His nickname, at least early on, was the "Bogalusa Bomber."

Again, one guy links the two players, and it is an All-Star: