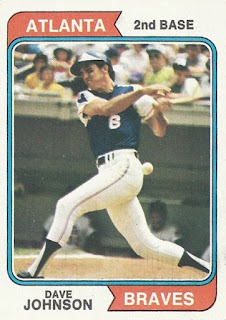 Here we have yet another action shot - which is nice - with the featured player in a compromised position - which is not so nice. After two pop-up shots, we have Davey Johnson swinging and missing big at Shea Stadium. Since the card is a featured one (ending in a "5") wouldn't it be nice to have a more complimentary shot? Maybe the boys at Topps though a little humility was in order.

1973 was Johnson's biggest offensive year by far; a season in which he was one of three Braves to hit 40 home runs which was a first. Ironically, Atlanta did not have a winning record that year. A big reason for that can be seen by checking Davey's defensive stats. In an admittedly abbreviated season in '72 in Baltimore, he had six errors and during his time there averaged about twelve per season. In '73 he had 30. Atlanta was just the place defenses went to die.

Davey Johnson's dad was in the Army and as a kid Davey moved around a bunch, a status that would be emblematic of his later career as well. He settled in San Antonio for high school and then went to Texas A&M where for two years he played both hoops (point guard) and baseball (shortstop). Signed by Baltimore in '62, he kicked things off in his old position in C ball and had such an excellent season that in '63 he jumped all the way to Double A. That year he began playing second a bit, kept up his very good offensive numbers - between those two levels, he'd hit about .315 with 23 homers and 105 RBI's in what amounted to about a full season - and by season's end was in Triple A. At that level in '64 he lost some points off his average but continued to show good power with 14 triples, 19 homers, and 73 RBI's. And his defense all along had been very good. So he made the cut out of spring training in '65, played and hit very little, and returned to Triple A, where for about a third of a season he hit .301 whie playing shortstop exclusively. By the end of the season he was back in Baltimore.

When Johnson came up to Baltimore the team was pretty set in the middle infield with excellent defenders Jerry Adair at second and Luis Aparicio at shortstop. But Davey's stats to date were tough to ignore and the notion of his added pop in the line-up got him the starting second base gig over Adair in '66. Adair objected - he was later traded to Chicago - but Davey argued his choice pretty well, coming in third place in AL Rookie of the Year balloting, making that year's Topps team, and playing on a Series winner. He boosted his power a bit in '67 and then like just about everyone else his offense declined in '68 - though not by much - and he garnered his first All-Star selection.In the Series years of '69 to '71 Davey boosted his average to just north of .280, got a couple more All-Star nods, and won his three Gold Gloves. By then recurring back pain was becoming an issue for him and in '72 - also a year in which he had a shoulder injury - he missed some serious time and his offense stats tumbled significantly. By then Bobby Grich was ready to ascend into a full-time position and after that season Davey went to the Braves with Pat Dobson for Earl Williams.

Following his big year Johnson split the '74 season between second and - to relieve his back - first base. His numbers much more resembled his Baltimore ones that his '73 ones though he did get his error totals down to those levels as well. Then, after one at bat in '75 - I have never been able to figure that out - Davey was released. Shortly thereafter he went to Japan where he had a terrible '75 season while playing third but a pretty good bounce in '76 with a line .275/26/74 back at second base. Overall, it was a  very interesting time with the Giants. After two years overseas he came back as a part-timer with first Philly - for whom he had a real nice '77 with a line of .321/8/36 in only 153 at bats - and the Cubs. His playing career was done after the '78 season. Davey finished with a .261 average with 136 homers and 609 RBI's. He hit .225 with a couple homers and twelve RBI's in 31 post-season games. And defensively at second he is in the top 75 in both putouts and double plays.

Johnson then went right into managing, first in the Inter-American League and then for various stops in the Mets' chain before arriving at the top in '84. He led the Mets to the Series win in '86 and had by far the best winning percentage of any of their managers so he was of course let go by them in 1990. In '93 he was hired by the Reds and in the two strike-shortened seasons that followed took them to first place; he was then fired again. The same thing happened in Baltimore and then LA: he made winners out of losers. After leaving LA in 2000 he took on a succession of national team gigs and is now a part-time advisor to the Nationals. As a manager he has gone 1,372-1,071 up top and in the minors 190-155. I am one of the people who thinks his managerial successes warrants a Hall of Fame entry. 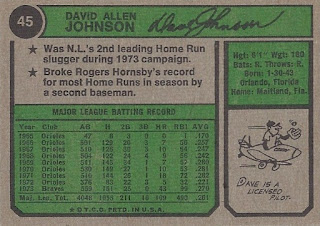 The back of the card is all about his '73 season which makes complete sense. Topps gets points for the cartoon as it is finally a real tidbit. It would have been nice if he could have used his piloting skills to barrel roll some of the owners for whom he managed - Marge Schott and Peter Angelos - out of the plane. He is a pretty accomplished guy: he finished his degree in Mathematics at Trinity College; he is a master scuba diver and has taught classes in that; and he took grad classes at Johns Hopkins.

Let's use the AL to link these two guys: