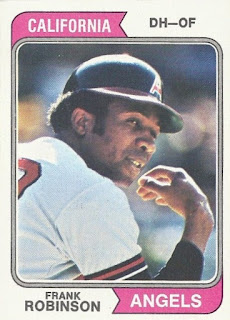 This is my favorite Frank Robinson card. Pensive and smiling, I think he looks very noble. Very managerial, which would be a fitting adjective in a couple years. '73 marked Robby's return to the AL in a big trade after a one-year hiatus. Early in the season he moved into sixth place for all-time homers and he had a pretty good year, coming back in time to take advantage of a new position and rest his tired knees; it would be his last big season.

Another of this set's iconic Hall of Famers, Frank Robinson was signed by the Reds in '53 out of his Oakland high school. He then pretty much burned through their minor system with big years in '53 (C ball) and '54 (A ball) before having an off and shortened '55 due to a shoulder injury. But Cincy had seen enough and in '56 Frank moved seamlessly into a hard-hitting outfield (with Gus Bell and Wally Post), helped push the Reds to a winning record, and won Rookie of the Year. Not one to buy the sophomore jinx thing, Robby pretty much eschewed that in '57 though  renewed shoulder pain pulled down his numbers a bit in '58. Primarily an outfielder, he would move to first base in '59, allowing Vada Pinson to break in during the latter's rookie year. It was around this time that Robby would invert his strikeout to walk ratio, adding to his slugging prowess with a high OBA. A big year that year was followed by another injury-affected (though not much) '60. In '61 Frank would move back to the outfield and lead Cincinnati to the Series, winning his first MVP award. A bigger '62 followed as did three more awfully good years. Following the '65 season Robby was viewed as aging fast and the Reds management sent him to Baltimore for pitchers Milt Pappas and Jack Baldschun and outfielder Dick Simpson. Oops.

All Robinson did in his first AL season was post his monster MVP triple-crown numbers, leading his new team to a Series win. But Robby WAS aging pretty quickly - at least his knees were - and '67 and '68 were discount years affected by injury. He bounced in '69 with his final 100 run/100 RBI season again helping Baltimore reach the Series, and then had another discounted year - except for his average - in '70 as the O's won the thing again. '71 was yet another Series year as Robby just missed another three figure RBI season. After that season, Robby was traded to the Dodgers in '72 for a bunch of young players; the only one of those guys that would have a prominent career was Doyle Alexander.

After a '72 season in which Robinson posted a career - till then - low in at bats, he hit the road again in another big deal: he, Bobby Valentine, Bill Singer, Billy Grabarkewitz, and Mike Strahler went to California for Andy Messersmith and Ken McMullen. Robbie remained with the Angels through most of '74 but the manager in him was coming out and he didn't get along too well with Bobby Winkles. So late that season he went to Cleveland and for the year as a whole put up a .245/22/68 line. The following season he was named the team's manager - in his first managerial at bat he homered - and would stay with Cleveland through '76 as a player when he retired from that role. He finished with just short of 3,000 hits, 586 homers, 1,812 RBI's, and a .294 average. In the post-season he hit .238 with ten homers and 19 RBI's in 35 games. He had twelve All-Star seasons and won a Gold Glove and got into the Hall his first shot in 1982.

Robinson managed Cleveland through the '77 season and after getting canned when that team sort of imploded, finished out the year as a coach back in Anaheim. He then coached for Baltimore ('78-'80) and managed a bit ('78) in its system. In "81 he moved back to the NL as manager of the Giants, which lasted through mid-'84. He then returned to Baltimore to coach ('84-'87), act as an admin guy ('87-'88), and manage ('88-'91), winning Manager of the Year in '89. Robby had a habit of taking over broken teams, making them better - sometimes playoff-better - and then being let go shortly into another fade. He got back to the Baltimore admin side from '91 to the late Nineties, when he took on the same role for MLB. By the 2002 season, the league had taken over the Montreal franchise and named Frank its manager, which he did through '06 for his final baseball gig. He went 1,065-1,176 as a manager up top and remains retired.

1976 was a big anniversary year. Besides the Bicentennial, it was the NL's centennial and the 75th anniversary of the AL. As part of the promotional exercises surrounding those events, each team was asked to submit its most memorable moment in its history. Cleveland's was Robinson's first at bat as manager, the obvious significance being that he was the first black manager. The only other one I remember offhand was Texas' (David Clyde's first game). I am continuing to try to find that list and will include it here if and when I do. 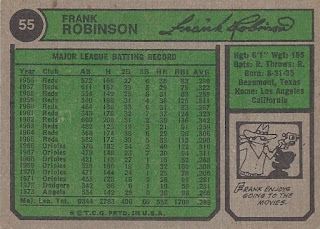 This is a nice card back. I believe this card was the first one in which Frank's lifetime average dipped below .300 in quite some time. The cartoon is lame and has been seen before. Maybe I will count all the movie goers.

Frank's year in LA gets some mileage here:

Since we still have seen only one Dodger card, I am happy to throw around more Blue.
Posted by wobs at 9:09 AM