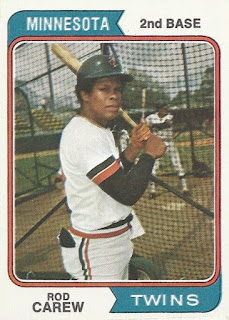 This looks like a home uniform Rod Carew is wearing so I am tempted to say this shot is from Metropolitan Stadium. I am pretty sure that by '73 the Twins stopped wearing pinstripes but perhaps I am wrong. Every other Twins card was photographed in Anaheim but this is the only jersey that is not that grey/blue color in the set. But Rod certainly does look pissed, doesn't he. Maybe he just had a contract meeting with the generous Mr. Griffith. And who's that in the batting cage? I am going with Mike Adams, but let's not pretend I really have a clue.

Not too much to reveal about this guy. I remember watching a show where they had Rod batting super-slow motion and you could actually see him adjusting his swing halfway through the swing itself. It was pretty amazing. This man could just hit his ass off. And in '73 he did just that, leading the AL with his .350 average and his hits and triples totals. Plus he stole 41 bases, until then his MLB high.

Rod Carew was born in Panama in interesting circumstances (see below). While he was in high school his mom moved with Rod and his brother to NYC to get away from Rod's dad, who was an abusive guy. Rod played some club ball, got a tryout with the Twins when they were in town to play the Yankees, and got signed on the spot in '64. He then put in three seasons in the minors - a year in Rookie ball and two in A ball - during which he of course averaged .300, stole 114 bases, and also found time for military reserve work (and he wasn't even a citizen!). In '67 he got promoted all the way to the top.

Carew moved right into the starting second baseman job for the Twins and won the '67 AL Rookie of the Year. He was also an All-Star which he remained every season but his last, or 18 consecutive years. That first year was extra fun because Minnesota was in it until the final game of the season. '68 was a little bit of a discount but so was just about EVERY hitter's '68. But he made up for that in '69 by winning his first batting title and stealing home seven times. In '70 Rod was cranking when he got taken out by a Mike Hegan slide at second and missed over half the season to leg surgery. '71 was a nice comeback year, '72 another hitting title, and '73 ushered in the big stolen base totals. In '74 (.364) and '75 (.359) came two more titles. That second year Rod began putting in some time at first, a position he would then play for pretty much the duration of his career.. In '76 he missed another title by three points and in '77 he had his best year, flirting with .400 - he finished at .388 - and having his only 100-RBI season, as well as a .449 OBA. He won the AL MVP that year. After one more season - and title (.333) - he finally got out of Calvin's miserly domain and went to the Angels in a pretty big trade. Four guys came over from California. I remember one of them, Ken Landreaux, said he should have been traded even-up (what a boob!) for Rod.

With California the batting titles stopped but the hitting sure didn't and his first season of '79, though he missed nearly two months with a broken thumb, Carew was rewarded with his first post-season time in almost a decade.He added 13 points to his average in '80, kept it north of .300 during the strike year and in '82 helped the Angels to another post-season berth with his .319.He topped out for California with a .339 in '83 and then played two more years, retiring after the '85 season. Rod finished with a .328 average, 3,053 hits, over 1,000 stolen bases, and a .393 OBA. The only real viable knock on him was his poor post-season average of .220 in his 14 games. Defensively he is in the top 100 for major fielding categories at both first and second base. He made the Hall on his first shot in '91.

Following his career Carew ran his own hitting school from his California home. He then began a long run as hitting coach for the Angels ('92-2001) and the Brewers (2002-'03). He made headlines in the mid-90's when his daughter got sick and he pleaded for bone marrow donors. She sadly passed away at an awfully young age. 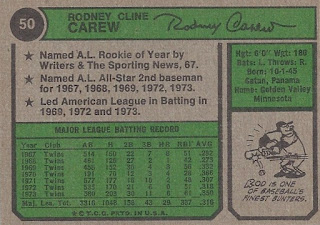 Some tidbits on the back of the card include his full name (Rodney Cline was the name of the doctor who delivered him - on a train!), and his apparent ability to bunt from the wrong side of the plate.

Given Steve Renko's movement during the second half of his career, this one is easy: