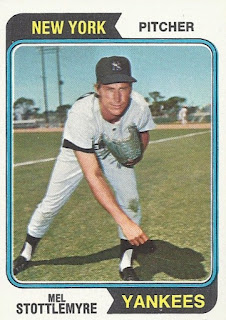 1973 was Mel Stottlemyre's last productive year as a Yankee starter. During '74 he would develop rotator cuff problems that would end his pitching career. But his '73 was pretty good. Mel posted a way better than league average ERA and his ninth straight season of over 250 MLB innings, both which deserved a better than .500 record. But such was life with the Yankees back then. I find this card interesting for a couple reasons. First is that it appears to be a spring training shot as I believe Mel is right outside the left field foul line and there are no stands in the background. Two is the guy in the background has a red helmet on, so where is this shot? Maybe it's the spring home of the White Sox? Philly? The Reds? Lastly, the knee stain is interesting. I would say it is from sliding drills but since '73 was the first DH year, there would be no reason for Mel to be doing that. Maybe it's a photo from a prior season. See all the thought tangents? Who says baseball cards are superficial.

Mel Stottlemyre was a career Yankee. He was signed in '61 after he finished his degree at Yakima Community College in Washington. That year he went 9-4 as a starter in D ball with well over a strikeout an inning. That last stat was a bit of a surprise because Mel was a sinker specialist and didn't normally put up a lot of K's. In '62 he advanced to B ball, where he went 17-9 with a 2.50 ERA. The following year in Triple A Mel was made a swing guy which really wasn't his best role, evidenced by his going 7-7 with a high ERA. He remained at that level in the same role to start off the '64 season. GM Ralph Houk got wind of that, ordered Mel's return to the rotation, and by mid-summer he was 13-3 with a 1.42 ERA. By early August he was a Yankee.

Stottlemyre reported to a Yankee team that was typically smack in the middle of a pennant race but was toting some hurting mound arms, hence at least part of the reason for his summons. All Mel did was post his 9-3, 2.06 stretch run without which NY probably would not have made the Series. Then to make things even more stressful for the new guy, in each of his three Series appearances that fall, Bob Gibson was on the other side. But the new guy threw pretty well which was good since it was the last playoff action he'd see as a player. Unfortunately Mel's NY time coincided almost perfectly with a big post-season drought for the Yankees. But that occurrence sure wasn't his fault. In '65 Mel won 20 for the first time while leading the AL in innings and with 18 complete games. That year he was an All-Star as he was in '66 though with the moving on of middle infielder's Tony Kubek and Bobby Richardson, that part of the diamond - and elsewhere - got a bit porous and Mel's ERA popped as he led the AL in losses. A much-improved '67 was enabled by some infield solidity and like a bunch of pitchers, Mel posted probably his best line in '68 while returning to the All-Star game, as he would the following two seasons. In '69 he again led the AL in complete games, this time with 24. He continued to roll until '72 when a very challenged offense contributed to another season of AL-leading losses. After his tortured '74 Mel was released during spring training of '75 (though George Steinbrebnner had just told him he'd be a Yankee for life) which ended Mel's playing career. He finished 164-139 with a 2.97 ERA, 152 complete games, 40 shutouts, and a save. In that '64 post-season he went 1-1 with a 3.15 ERA in his three games. At times a pretty good hitter, for his career Mel was a .160 batter with seven homers and 57 RBI's.

Shortly after his playing career ended he took up a new one as a pitching coach, first for Seattle as a roving guy ('77-'82), then up top for the Mets ('84-'93), Astros ('94-'95), and Yankees ('96-2005) for whom he had great success. He left that last gig after getting in an argument with - who else? - George Steinbrenner. In 2008 Mel took a one-year gig as the pitching coach for Seattle. He has had myeloma for some time now and since then has had to devote almost all his time to its treatment. He also had two sons pitch in the majors. 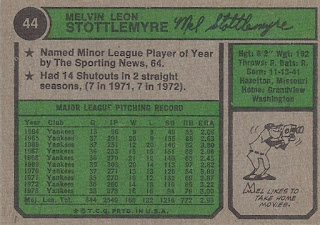 The first star on the back mentions his '64 season in the minors. Given his sons' eventual careers, there must have been an awful lot of pitching on those home movies. Mel's other son tragically passed away when he was only eleven from leukemia. Mel would spend a bunch of time working with the subject of the next post in NY.

Let's drag out another dynastic Yankee for the separation exercise: