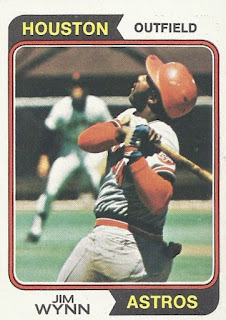 This is the second great action shot in a row. The only downside is that like the earlier George Scott photo, in this one it looks like Mr. Wynn is popping out. Plus this is the third Astro already and only one Dodger? I guess that gets rectified a little by The Trade.

I capitalize that last bit because Jimmy Wynn's move to LA was probably the most important off-season transaction prior to the '74 season. The only comparable one was the other big pre-season Dodger trade, but we will get to that one later. All Jimmy would do was hit 32 homers, drive in 108 runs, play a pretty mean center field, and lead LA to its first pennant since '66. Yes, I know they had Garvey and the rest come into prominence that year, but Jimmy was definitely the missing offensive piece. That year, Jimmy won Comeback Player of the Year. As for '73, the season from which he had to come back, it was one of his toughest. Along with missing some time to an injured shoulder Jimmy was moved to the top of the Houston order to take advantage of his normally uncanny ability to get on base, and because no other Houston hitter was doing the job there. So his power numbers tanked pretty hard and so did his average as he was very uncomfortable in that spot. But that experience probably made his '74 one all the sweeter.

Jimmy Wynn grew up in the Cincinnati area, played ball at Central State University in Ohio for two years and was signed by the Reds in '62. He had a big first season that summer in D ball, hitting .290 with 14 homers, 81 RBI's, and a .448 OBA. A shortstop in high school and college, he played primarily third and second that year. Despite those numbers he was left unprotected and then taken by the Colt .45's in that year's expansion draft. For Houston, Jimmy jumped to Double A in '63, resumed playing shortstop, and put up a .288/16/49 line with eleven triples in about a half season, though his walk totals came way down. He came all the way up mid-season and the rest of the way put in OK rookie numbers at short and in the outfield. He began the '64 season in Houston but after a tough time at the plate, went down to Triple A where he put up better numbers while playing nearly exclusively in the outfield. He made it back up top in September to stay and brought his new position with him. 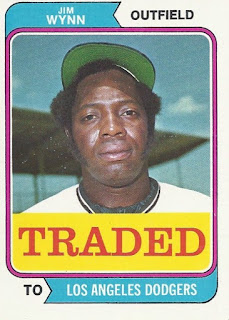 Wynn moved into the Houston starting center field role that last month of '64 and the next year he would show some good power, some big K totals, and steal an uncharacteristic 43 bases. He also walked at a good clip and put up his first good OBA at .371; that stat would be a hallmark of his career. In '66 though his average came in a bit, he pulled his strikeouts much lower and in general his offense was running at a premium to the prior year's when he crashed into a wall chasing a Dick Allen fly, pretty much shattering his left arm and ending that season. But '67 was a big comeback season as he put up big power numbers (and led the NL with his 137 K's), scored over 100 runs, and made his first All-Star game. '68 was tougher: on top of it being the year of the offensive swoon, it was also the year Houston got a new manager in Harry Walker. Walker was a big hitting guru and Jimmy chafed under Walker's criticism of his free-swinging batting style (apparently all the walks were just random occurrences). But despite the generally lower numbers Jimmy upped his OBA and then did that huge in a much better '69 when he put up a .436 while leading the NL with 148 walks. After another good year in '70, Jimmy went through an ugly divorce in '71 that killed his season that year. That year Jimmy also moved to right field as new guy Cesar Cedeno took over center. Another big bounce followed in '72 before the problematic '73 and the trade shown here.

Wynn's big season in LA in '74 earned him his second All-Star get as he returned to his familiar spot in center. In '75 he was cruising at about the same pace and by the end of June Jimmy was hitting .280 with 13 homers, 43 RBI's, and a .430 OBA. But LA got hit bad with injuries that year and partly to compensate Jimmy was moved all over the line-up. The rest of the way he would hit only .200 with five homers and 15 RBI's, though he did get his final All-Star nod. After that season he was traded to Atlanta with Tom Paciorek, Lee Lacy, and Jerry Royster for Dusty Baker and Ed Goodson. With the Braves in '76 Jimmy would split time between left and center and lead the NL with his 127 walks. But he was aging fast, hit only .207, and his other stats resembled his '75 ones. After the season he was sold to the Yankees. There he would DH and play right field. But after a very hot first couple weeks, he tailed off considerably and was released. Picked up by Milwaukee to fill the same role, his numbers never improved in what would be his last season. For his career Jimmy hit 250 with 291 homers and 964 RBI's, 225 stolen bases, and a .366 OBA. In his lone post-season he hit .192 - but with a .450 OBA - with a homer and four RBI's in his nine games. Defensively he is 30th all time in double plays from center and is in the top 75 in assists and putouts.

Wynn remained in the LA area and immediately after playing got a gig as a marketing rep for a beverage company. An attempt at a comeback in the Mexican Leagues in '79 went nowhere fast and by '85 he had relocated back to Houston. There he became a bartender, went through some tough financial times, and needed help from the Baseball Assistance Team. But another big comeback ensued and in the late Eighties he got a community rep gig with the Astros and for a while has been announcing for the team as well.

I cannot conclude the front card commentary without a couple notes. The regular card is from Candlestick and I would assume the Giant in the background is the shortstop, but the guy looks too meaty to be Chris Speier. Maybe Mike Phillips? Secondly, the Traded card is just butt-ugly. Since Wynn was quite photogenic - see his other cards - Topps gets the blame for that one. He looks like he just woke up. In a trash can. 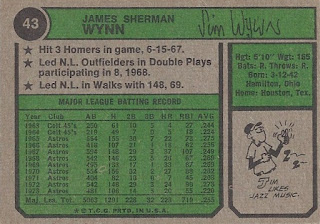 The thing that most jumps out at me on the back of the regular card is Wynn's vital statistics, particularly his height. I know that same data is on baseball-reference, but I could swear the guy was closer to 5'8". Jimmy would average over 100 walks a season from '67 to '76. The cartoon is a little disappointing; I am sure with a little work Topps could have dragged out a more interesting tidbit. I guess when the notes are upside down it's jazz. 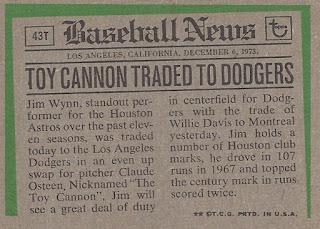 Jimmy Wynn had one of the greatest all-time nicknames and Topps gets to it on this card. The trade wasn't exactly even up as the Astros also got a minor leaguer named Dave Culpepper. I am pretty sure this will be that guy's only mention on this blog.

Since they were only a year apart in LA, this exercise is pretty easy: