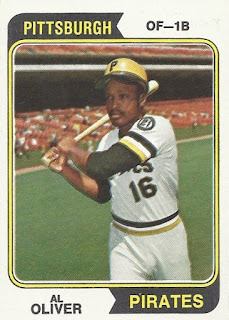 Here is Al Oliver at Candlestick. It is the first photo we get to see the number 21 on the Pirates' sleeves. That was Roberto Clemente's number. Like just about every other Pirate, Al's '73 was impacted by the off-season death of Clemente. With Willie Stargell forced to pick up more outfield time and Bob Robertson's stick starting to decay - though that one had nothing to do with Roberto's passing - Al put in more time at first base than he had since '70. It was still an awfully good season as he posted until then career highs in runs, homers, and RBI's, just missing the century mark in that last one. The only demerit Al gets - and I really don't want to be gross - is that he really needed to wear a cup for this photo. Too much information...

Al Oliver was a mean hitter and was only beginning to hit his stride in '73. During the early part of his career he alternated between first base and center field. Pittsburgh was loaded with hitters at both spots and Al was a desired guy in the lineup so I think his versatility contributed to his time on the field. Signed by the Pirates in '64 out of his Ohio HS, Al had been all-state in both basketball and baseball, the same as his HS teammate Larry Hisle (those must have been some teams). He put up some nice numbers three of his four years in the minors: in '65 and '66 he averaged over .300 in A ball;  in '67, his only off year, he had military commitments; and he had a big '68 line of .315/14/74 in Triple A despite some more missed time and prior to his late call-up. After a good fall ball season that year and a very good camp in '69 he was up for good.

Oliver immediately moved into the starting Pittsburgh lineup. In the minors he'd been exclusively a first baseman until pulling some outfield time in '68 and his first couple seasons first would be his primary position. He had a nice rookie season, placing second in NL Rookie of the Year voting. In '70 he upped his plate time and his RBI's and in '71 with Bob Robertson's arrival, he moved to center field, where he continued his very good defense and then won a ring. In '72 he cranked his offense a bit and made his first All-Star team. He would continue putting up very good offensive lines - he averaged a .307/15/78 line that would have been better if he didn't miss over a month in '76 to injury - through '77. That last year he was strictly an outfielder as Pops Stargell took over first.

After the '77 season Oliver was involved in a huge multi-team trade that landed him at Texas. While there he alternated between outfield and DH. Shifting leagues was not a problem for Al as he maintained his .300 average and high RBI pace. His first two seasons he hit .324 and in '80 he became a slugger big time with a .319/19/117 line that earned him his first Silver Slugger award. He won it again in a discounted '81 strike season and following it he returned to the NL, this time to Montreal, essentially for Larry Parrish. There he became almost exclusively a first baseman. In '82 he had his biggest season ever, leading the league with a .331 average, 204 hits, 109 RBI's, and 43 doubles, while also setting his PR with 22 homers. After one more season for the Expos during which he again led the NL in doubles, Al was traded to the Giants. His last two seasons he moved from San Francisco to Philly, LA, and Toronto. At that last stop he had some significant post-season numbers to close out his career. He finished with a .303 average with 2,743 hits, 219 homers, and 1,326 RBI's. In the post-season he hit .228 with three homers and 17 RBIs in 28 games. He was on seven All-Star teams and won three Silver Slugger awards

Oliver claimed that owner collusion forced him out of baseball before he was ready and cost him a sure Hall of Fame shot. But he doesn't seem bitter and since playing has done speaking engagements and has a self-help type website going which I guess has been another post-career thing. He has had some strong backing for HOF candidacy although his first year eligible he did not get the requisite amount of votes to stay on the ballot. His lifetime stats are right on the line. 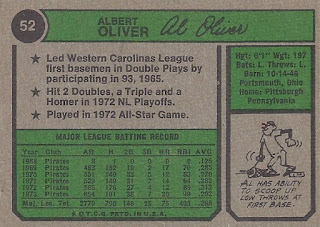 Al was quite a fielder as the first star bullet and cartoon point out. His nickname was actually Scoop. Again Topps defaults to an old season and while his '72 numbers were nice, '73 was much better as he reached his until-then career highs by far in some stats. While Al was in Pittsburgh he had his own radio show. For a while he must have stayed in Texas because when his son Aaron played football for Texas A&M, he was listed as having grown up locally. These days it appears Al is back in Ohio.

Let's make this an All-Star affair: