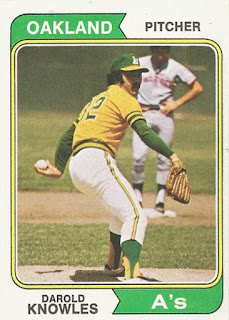 1973 was the year that made Darold Knowles famous, or at least the answer to a trivia question. It would be an unusual year for him, mostly in good ways. On his way to another very good Oakland season out of the pen, his best outing through the end of July was probably his last one: nearly five innings of two-hit shutout relief that got him the win. In fact, there's a good shot this photo is from that game as Darold only went up against the Rangers twice at home that year. That prompted Oakland to use Darold in a way he almost never was - in the rotation. So in August Darold got four starts and while the first three weren't anything special, the last one was: a six-hit shutout against Boston. The rest of the way he returned to the pen Then, after getting zero work in the AL playoffs, Darold had himself a helluva Series, becoming the first pitcher to appear in all seven games. Here he has a nice action shot hurling at home against the Texas Rangers. Who's that guy on second base behind him? It looks too small to be Jim Spencer or Toby Harrah or Bill Sudakis. I am going with Jim Mason. If I am correct about the game, it could be Mason, who was on second when Darold came in. The only other white guy to reach second in that game against him was Rich Billings, who I guess it could be as well. Whoever it is certainly is not an aggressive runner.

Darold Knowles was signed by the Orioles in '61 out of Missouri after trying - and failing - to give college a shot. A big fastball guy back then - see the card back - his first two seasons in C ball he went a combined 23-12 with a 2.79 ERA and nearly 400 K's in 325 innings. In '63 he graduated to Double A and went 16-7/2.73 and began expanding his pitches to incorporate some off-speed and sinking stuff so the K numbers came down. The next year he took on a spot role in Triple A so the innings were down but in '65 after a not great early look up top an improved 11-5/2.53 got him back up in Baltimore that again didn't go terribly well. While in the minors he also pitched a bit for the Twins' system although I see no record of a trade; this seems to have happened fairly often and I believe that back then it was fairly common for players to be loaned between franchises. While Darold's Baltimore looks were a tad short of perfection he was still claimed to be a hot property for the O's. Then they sent him to the Phillies with Jackie Brandt for Jack Badschun.

Knowles had a pretty good rookie year for Philly, posting over 100 relief innings and grabbing 13 saves with a nice ERA. But then he was on the road again, this time going to the Senators for outfielder Don Lock. Darold picked up where he left off and in '67 except for his record he improved on his Phillies numbers, posting 14 saves. Then he was en route to a very nice '68 when his season was cut short by National Guard duty in Japan, of all places. He returned in '69 and was an All-Star in another 13-save season. His best year was probably 1970, though. Despite a 2-14 record, he pitched 119 innings, got 27 saves and had an ERA of 2.04. About a month into the '71 season he was traded with Mike Epstein to Oakland for Don Mincher, Frank Fernandez, and Paul Lindblad.

Knowles had pretty excellent timing in getting with the A's. While in Oakland he closed the second most games behind Rollie Fingers, for whom he also set up (ooh, bad, ending with a preposition!). The balance of '71 he put up seven saves of his own and saw his first post-season action. He then put up a sweet '72 that included eleven saves before he broke his thumb late in the season while batting. Then in '73 he made up for his lost Series time in a big way. But then '74 was tough. Darold didn't get along too well with new manager Al Dark, his time on the hill came in a bit, and his numbers tumbled to a 3-3/4.22 season with only three saves. After that year he was again on the trading block, this time going to the Cubs with Bob Locker (around the corner) and Manny Trillo for Billy Williams.

Knowles had sort of an intriguing year in '75. Taking over as the Cub bullpen ace, he led the team with 15 saves and won six games, but his ERA was huge at 5.81. That number improved markedly in a '76 that had a line of  5-7/2.89 with nine saves. But by then Bruce Sutter was the new man in the pen and Darold went to Texas for Gene Clines. His '77 was quite good at 5-2/3.22 with four saves and was followed by a sale to Montreal that produced a better '78 at 3-3/2.38 with six saves. Darold then took the free agent route, signing with St. Louis, where he pitched through 1980. He finished with a 66-74 record, that one complete game shutout, 143 saves, and a 3.12 ERA. In the post-season he gave up no earned runs and put up two saves in his eight games.

Following his playing career Knowles has done a bunch of coaching at both the major and minor levels. From '81 to '88 he was a roving pitching instructor in the St. Louis system. He then moved to the Phillies, where he coached up top ('89-'90) and in the minors ('91-2001). He then coached in the Pittsburgh system (2002-'05) and Toronto's ('06-present) where he is currently coaching close to home in Florida.

By the way, this is another great instructional pitching photo. Knowles frequently threw a slider and judging by the grip and the position of the laces, that is what he is preparing to throw here. 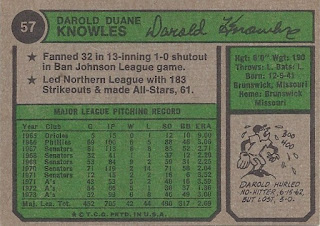 These are some pretty good bits of trivia. The Ban Johnson League was and is a college-aged summer league based in Kansas City (Knowles played at Missouri). The guy he pitched against struck out 18. In '61 he went 11-5 with a 3.29 ERA. He got those K's in only 164 innings. I can't find any more dirt about the no-hitter but it looks like it was thrown at Stockton, a California League C-level club.

He threw awfully well against them, but how do we get from Mr. Knowles to those '73 Mets? Through his NL days of course.