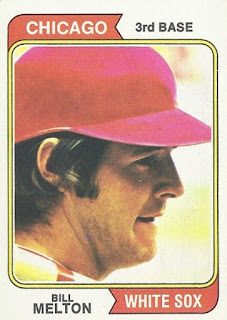 Bill Melton gets an action shot in what I assume is Comiskey. Melton was a good looking guy but here he looks toothless. It is either a weird shadow effect or he took to wearing a dark mouthguard. It also looks like someone swiped the logo off his helmet. But for all the demerits of this shot, it sure beats the '77 one when he had a perm. And in general '73 beat '77 for Bill, though not ultimately. Healthy again after receiving some pretty radical treatment (enzymes were injected in his spine to digest inflated discs), the Sox were deemed contenders, to be led offensively by sluggers Dick Allen and Bill. Bill did his part, putting up 85 RBIs, but this time Allen got hurt and the Sox were on their way back to the cellar.

Bill Melton was another late returnee to baseball (he'd played little league). He didn't start playing again until he went to Citrus Junior College to play football, and he only did that after he couldn't make any money selling Avon products. He was signed by the Sox in '64 and spent a short season in rookie ball, hitting .286 and playing second. In '65 and '66 he played the outfield for Single A and impressed scouts with some mammoth homers. He also got knocked unconscious by a beanball in the first season and missed some time. In '67 he moved to Double A and to third base, but it wasn't exactly a smooth transition. Still, the power kept coming and in '68 he did pretty well in Triple A with 15 homers and 62 RBIs in under 400 at bats. By the end of the season he was in Chicago playing third base where he had decent rookie numbers.

In '69 Melton took over third base from Pete Ward and after getting some hitting tips from manager Don Gutteridge put up some good numbers, leading the team in homers and RBIs. In '70 he got off to a disastrous start at third - ten errors in his first 24 games - and was moved to the outfield for a good part of the season. He did, however, hit 33 homers to break the club's record and grab 96 RBIs on an awful team. By the end of the season he was back at third and would be the team's most reliable player there since the early '30's. In '71 Bill would have 25 homers by the All-Star break, make that team, and wind up leading the league, again with 33. Hopes were high for '72 when the Sox acquired Dick Allen giving them two legit power hitters for the first time in anyone's memory. Unfortunately Bill, who was born with a condition in which his bones never fully fused, hurt his back and was unable to get past the halfway mark and the Sox narrowly lost out to Oakland.

In '74 and '75 Melton hit 21 and 15 out, respectively, but the back continued to nag him and his RBI numbers came in by about 20 runs. After the '75 season Bill was traded to the Angels with Steve Dunning for Jim Spencer and Morris Nettles. After a sub-par injury-filled year for California, Bill got sent to Cleveland in '77 for Stan Perzanowski. While he briefly supplanted Andre Thornton at first base, Bill generally DH'd or pinch hit in what was his final season. For his career, Bill hit .253 with 160 homers and 591 RBIs in about eight full seasons.

Melton did some work in real estate in California before returning to the Sox in the '90s first to do community work and beginning in '98 as a television and radio analyst. 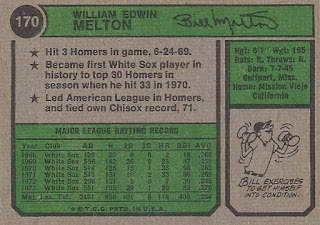 Bill's star bullets are all about the home runs. When they tapered off after his injury, Bill was pretty mercilessly ridden by Cubs icon Harry Caray when he announced Sox games. I always felt Caray was a bit of a jerk for that.

I am going to recycle a name from above for this exercise: