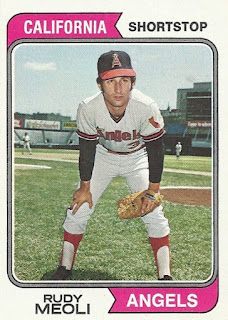 Rudy Meoli gets a rookie card shot at - where else? - Yankee Stadium. There are a lot of shots there in this set. Maybe the boys at Topps figured the place would be off-limits the next two years so they were compensating. Rudy was number two in a long line of shortstops used to replace the recently departed Jim Fregosi (Leo Cardenas was the first). None would be the starter for more than one season until Tim Foli in '82 to '83. In '73 Rudy grabbed the starting shortstop job after Cardenas went to Cleveland. While his offensive numbers were nothing special he would make three great plays that season to help save both of Nolan Ryan's no-hitters.

Rudy Meoli was born in upstate NY and moved to California as a kid. He was drafted out of high school by the Angels in '69 and then put up great numbers that season in Rookie ball. He then posted generally good middle infielder stats as he rose through the ranks and reached Triple A by '72.  In '74 most of his season was spent back in Triple A where he hit .308. Up top that season most of his games were at third and while his average rose a bit , it did so on only 90 at bats. In '75 he backed up everywhere in the infield but first, but his average slipped down to .214 and after the season he was sent to San Diego with Bobby Valentine for Gary Ross. Before the '76 season began he went to the Reds for Merv Rettenmund. For Cincy he played shortstop and then second at Triple A Indianapolis but with All-Stars ahead of him at each spot he wasn't coming up in a hurry. Down there he hit .261 that year and upped his average to .286 in '77 and than before the end of that year he went to the Cubs. For Chicago he hit .293 in Triple A and played third but didn't get too much time up top, and he would get released after the season ended. The Phillies signed him as a free agent before '79 and he began the season on the roster but only hit .178 as a backup and was sold to the Twins that June. For them he played at second and third at Triple A and was then released. He would sign briefly with the Giants but would not be on a roster by the time the '80 season began. That would be all for baseball for Rudy. His numbers included a .212 average although he did hit over .280 for his minor league career with a .385 OBA.

Not too much print on what Meoli did following baseball. There is a Rudy Meoli listed at various places in Anaheim and Fullerton, California, who is described as an officer in a solar engineering firm and who holds various patents by himself and through the firm of solar-based implements. If that is this Rudy - the initials are all the same - he seems to have thrived since baseball. 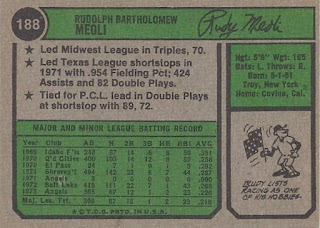 Rudy gets star bullet props for his defense. Up top in his only significant season he led shortstops in errors in '73 but those numbers would improve markedly later.

So Baylor and Meoli played for the same team, just a couple seasons apart: