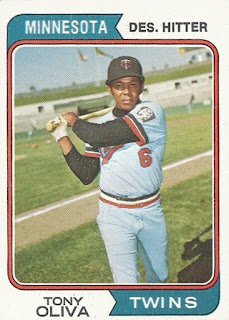 Tony Oliva shows his swing in Oakland. This park had sort of a nasty association for Tony since it was there in '71 that he tore up his knee fielding a grounder in the outfield. That injury destroyed all his cartilage in the knee and forced him to basically miss the '72 season to do rehab. It was thought that his career was over but the card title gives a hint to its revival. After Orlando Cepeda, Tony is the second guy exclusively depicted as a DH in the set. And like Orlando, Tony had a big revival year in '73, putting up a nice average and posting power stats that compared nicely to those before his injury. That new DH rule really was a life-saver to some bad kneed former All-Stars.

Tony Oliva is a Cuban who grew up on his dad's plantation with four brothers and five sisters. His birth name is actually Pedro but he assumed the name Tony when he borrowed his brother's passport to come to the States in '61 to play ball. Signed by the Twins that spring he went to camp in Florida and hit well but was cut because anyone non-white couldn't play for the Florida development team. Having nowhere to go - Cuba had just been ruled off-limits for travel - he found some friends in Charlotte and went up there. It was another Twins franchise and the owner of it, Phil Howser, liked what he saw in Tony, convinced the Twins to re-sign him, and then sent him to Wytheville, another D team. All Tony did was hit .410 for him there. In '62 Tony moved to Howser's team, a Single A one, and hit .350. That was followed in '63 by a .304 season in Triple A. All three years he showed pretty good power as well and his fielding improved tremendously over that time. In his two brief call-ups those last two seasons he hit well over .400.

In 1964 Oliva would have one of the best rookie years ever, becoming the first rookie to lead a league in hitting and generating considerable power. He led the AL as well in doubles, hits, runs, and total bases. His stats would get him Rookie of the Year and a place on the Topps team. But by mid-year '65 he was hitting only .250 with torn up knees and a bad knuckle on his hitting hand. One result of that was his propensity to let the bat fly on some big swings since he couldn't hold onto it properly and in his games lots of players on the bench would wear batting helmets. Another result was that everyone thought the dreaded sophomore jinx had struck. But that was laid to rest as he pulled his average up to .321 and had a comparable season to his rookie one. '66 would be another .300 season but '67 to '68, while good, were off for Tony due to his problem knees. He revived big the next three seasons, getting over 100 RBIs the first two years and winning the batting title in '71 despite barely being able to walk the second half of the season.

In '72 the injury hit hard and while Tony was rehabbing himself and re-generating his magic at the plate, he couldn't field at his former level by a long shot. The DH rule saved his career and '73 was a nice comeback year. He would continue to DH for the Twins through '76 though the big power days were behind him and retired after that last season with a .304 average, 220 homers, and 947 RBIs in 15 seasons. He made eight All-Star teams and won a Gold Glove. In the post-season he hit .314 with three homers and five RBI's in his 13 games.

Oliva began coaching for Minnesota his last playing year, which he did through '78 up top. He then pulled the same role in the minors from '79 to '84, returning to Minnesota from '85 to '91 (he was hitting coach for both Series winners). Since then he has been a minor league hitting coach for the team. 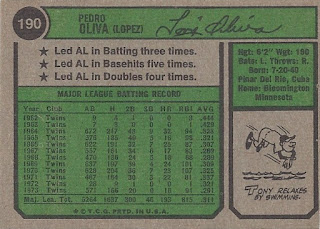 Tony has some excellent star bullets. He would not better any of those numbers during the remainder of his career.

These guys faced each other in the '65 Series. We hook them up with a great nickname:

Mudcat Grant threw for Cleveland a few years before coming to the Twins in '64, just in time to help lead the team to the Series the next year. His 21-7 record was by far his best and though injuries would derail his career a bit, he put together another nice season in '70 as Oakland's bullpen ace. His last years he also threw for LA, Montreal, St. Louis, and Pittsburgh, finishing in '71.
Posted by wobs at 11:59 PM