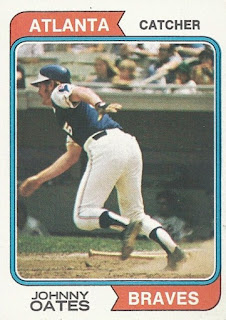 Johnny Oates' action card at Shea is from the same game as Davey Johnson's. Again that looks like Tom Seaver in the dugout so he didn't pitch - the only game Seaver pitched against the Braves at Shea that season was a complete game win - so we can eliminate one game of the six these guys played each other there. That's the only digging I feel like doing to figure out which game this was. Johnny looks like he's legging out a hit to the right side of the field during his first season for Atlanta. It would be cool if it was the July 7th game where Johnny had a pinch-hit single and DJ homered, but that's just conjecture. In '73 Johnny took over starting Atlanta catching duties from the guy for whom he was traded after the prior season, Earl Williams. A very good defender, he wouldn't match Earl's bat pop and that year he would get the most at bats of his major league career.

Johnny Oates was born in North Carolina, played high school ball in Virginia, and continued things at Virginia Polytechnic (now Virginia Tech) where after a sophomore season in which he hit .410 he was drafted by the White Sox in '66. He said no thanks, hit .342 his junior year, and was drafted and signed by the Orioles. The next three seasons he moved up the minor league ladder, displaying very good defense and pretty good averages but without much power. In '70 between Triple A Rochester and Baltimore he only had 34 at bats so he may have been hurt. He would spend all of '71 at Rochester and then have a '72 rookie season for the O's where he pretty much split the catching chores with Andy Etchebarren. He led league catchers in fielding percentage (.995) and after the season went to Atlanta with Davey Johnson, Pat Dobson, and Roric Harrison for Williams and Taylor Duncan.

In '74 Oates again got the most games as catcher but his average dropped to .223 and the following season he was sent to the Phillies with Dick Allen for Jim Essian and some cash. There he split time with Bob Boone and had his best offensive season, posting a .286 average and a .349 OBA. He was again slated to swap equal time with Boone the next season but in his first start in '76 Johnny was steamrolled at the plate by Dave Parker and broke his collarbone. That injury also pretty much wrecked his playing career. In '77 he went to the Dodgers for Ted Sizemore where he would be pretty much the third-string catcher the next three seasons. In '77 he would hit .269 in 156 at bats but that was the last season he would get up over 100 times. He would be released right before the '80 season and then sign as a free agent with the Yankees for whom he would do his back-up thing sparingly two more seasons. That would end Johnny's career in which he hit .250 with 14 homers and 126 RBI's. He also hit .333 in three games in the post-season.

Oates would be another guy who jumped right into coaching. From '82 to '83 he managed in the Yankees' chain. From '84 to '87 he coached for the Cubs. He then moved back to the Baltimore organization where he managed in the minors ('88), coached ('89-'90) and managed ('91 - '94) the O's, where he would revive the franchise and win Manager of the Year in '93. But O's owner Peter Angelos would fire him during the '94 strike and in '95 Johnny would take over managing the Rangers. He would lead the team to its first ever post-season appearances and again win Manager of the Year in '96. He would keep that gig through early 2001 when he would resign after what he thought was a horrible start. His overall managing record was 797-746. Later that year a brain tumor would be found and Johnny would pass away from brain cancer in 2004 at age 58. He is another guy about whom I could find not a bad word said while researching this post. 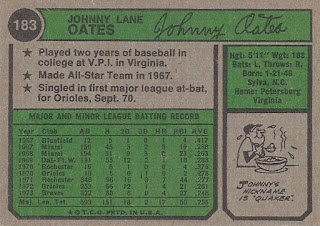 The All-Star team in the second star bullet was a Single A one. I never heard that nickname while Oates was playing but that's too bad because it's a pretty good one.

This hookup is not so short but the Hall of Famers come in handy: