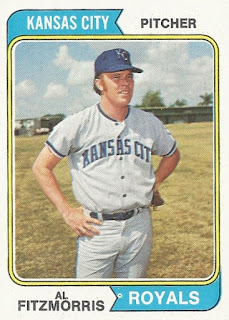 Al Fitzmorris is giving us a good look at the old school Royals away jersey in this shot. The newer road jersey was the pullover that most Royals on this blog have been photographed in so far. This may mean that this photo is from a season other than '73 but whenever it is it is a spring training shot in what appears to have been a drought year given that not a blade of grass in the background appears green. 73 would be Al's first consistently good MLB season which is ironic since he started it back at Triple A Omaha - where he went 9-8 with a 3.40 ERA - before moving back to KC in July. From there on it was nearly all rotation work as he turned in an excellent second half record and a very good ERA. His combined win total of 17 was the highest of his career. This card is also the last card Al would be sans mustache.

Al Fitzmorris was born in Buffalo and moved to San Diego where he was a high school star in baseball, football, and basketball (he gets good props for that last sport on his '73 card). He was signed by the White Sox in '65 as an outfielder out of Johnson County Community College in Kansas. He started off well enough, hitting .292 in D ball, but only .223 in A ball after being promoted. In neither place did he exhibit much power and after a similar run in A ball in '66 - .237 with 45 RBI's in 337 at bats - he took some tentative steps toward pitching. Early results were good enough (a 1.29 ERA in four games) that in '67 he moved to the mound full-time and went 14-8 with a 2.27 ERA. The next season he won 11 with a 2.73 ERA. It looked like the move to pitching was working for him but he was still in A ball and the Sox left him unprotected in the expansion draft, allowing the Royals to grab him. He would spend that first season at Triple A, winning ten games. After a bit of pen time in KC that year, he came up full-time in '70.

Fitzmorris would spend his first two seasons in KC as a spot starter/long reliever, posting a good record with a sub-par ERA. In '72 the record reversed itself as he spent almost all his time in the pen, posting three saves as the long guy. After Al's nice return in '73 in '74 manager Jack McKeon put him in the rotation. The next three seasons Al would post some solid numbers: 13-6 with a 2.79 ERA and a career-best four shutouts in '74; 16-12/3.57 for his best MLB victory year in '75; and 15-11/3.06 in '76. In the playoffs that year Al would rather famously not pitch as Whitey Herzog dumped his lefty starters against the primarily left-handed Yankee lineup. That winter Al found himself in a familiar place - unprotected in an expansion draft. He was picked by Toronto and immediately traded to the Indians for Alan Ashby and Doug Howard.

Unfortunately Futzmorris would be the other big pitching bust for Cleveland in '77 - Wayne Garland got the most of that thunder as a free agent signee - going 6-10 with a 5.41 ERA. After a couple games in the pen to start the '78 season he was released. The Angels nabbed him pretty quickly and Al went 1-0 with a 1.71 ERA in nine games. He was only under a one-year contract though and he left as a free agent after the season. He then signed with Hawaii, San Diego's Triple A club, as a pitcher/coach. There he threw well enough but never made it back in what was his final season. Al went 77-59 with a 3.65 ERA, 36 complete games, eleven shutouts, and seven saves. As expected, he was a pretty good hitter, putting up a career .242 MLB average.

Since playing, away from his activities described below, Fitzmorris has been a salesman for a few different manufacturing companies and has been a color guy for Royals broadcasts for some years. He has also done community work for the team. There is a very informative interview with him here. 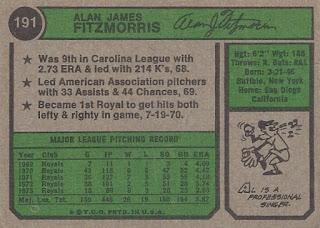 These are some pretty good star bullets. The first is pretty amazing, given Al's MLB tendencies. He got those K's in 198 innings. In the majors, he was notoriously low in the strikeout department, averaging about three every nine innings. He put up a complete twelve inning game in which he struck out one guy. As a fielder he had three successive seasons with no errors. That last bullet is pretty cool; Al hit .290 that year with four doubles in nine hits. Lastly this is the second year in a row Topps reminds us Al was a singer. He still does that and writes a bunch of music.

All AL here. The recently departed Killer helps out: