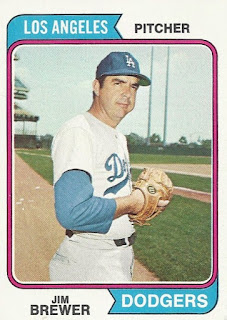 Here Jim Brewer poses at Shea - we can't seem to get away from NY these past few posts - with some chaw near the end of his productive time with the Dodgers. While his ERA came up a bunch, it was still very good and '73 was his first All-Star selection season and his final big save year with 21. A close look at Jim's right eye reveals that it's a bit off. That is courtesy of Billy Martin who sucker-punched our boy Jim here after Billy believed that latter guy threw at him. The punch landed Jim in the hospital with a broken jaw and a broken orbital bone that took three operations to fix. That happened in Jim's first season up top in 1960. He is the second Jim on this blog - Jim Ray Hart was the first - who had a rough start to his MLB career. Maybe it was a thing back then.

Jim Brewer was born in California, grew up in Oklahoma, and was signed by the Cubs in '56. He took a while to get going in D ball but in '58 - '59 won a total of 19 games as a starter in B ball. In '60 he went 8-5 for Triple A Houston with a 3.38 ERA and that got him his call up to Chicago and the introduction to Martin's fist. That altercation would put him out of action the rest of the season. In '61 he returned to the Cubs and spent his whole time there. But by the end of his second season he was a combined 1-10 with an ERA approaching 6.00. That got him a ticket back to Triple A in '62 where he went 10-10 with a 4.31 ERA in the rotation. In '63 he was back in Chicago but it was another mediocre stat year and after that season he was sent to LA with Cuno Barragan (that's a great name) for Dick Scott.

Before his first spring training for the Dodgers Brewer ran into a guy named Warren Spahn who fixed the younger guy's screwball, moving his thumb up to the side from the bottom of the ball. That small change was enough to turn Jim's career around and he would go on to ten-plus seasons as an effective LA reliever. In '64 he posted his first decent ERA. In '65 he knocked it down to under 2.00 in a very nice but short season. He also got some Series innings for the champs. The season was short due to some calcium deposits that developed in his elbow. Those would be cleaned out after the season and that operation would contribute to only a few innings thrown in '66, some of them back in the Series. But in '67 things took off. That year some starting time got him his first and only season of over 100 innings and saw his ERA drop by a run. From '68 on it was all relief and for the next three seasons, Jim would average nearly 20 saves a season as well as over a strikeout an inning. In '70 he peaked with 24 saves in a year he ironically posted his highest ERA during that run. In '71 and '72 the ERA would drop to well under 2.00 and he maintained the 20-save pace.

In '74 Mike Marshall took nearly all the relief innings in his big record year so Brewer's appearances dropped significantly and his saves to zero although his numbers were still pretty good and he got his final post-season work. In '75 he began the season 3-1 but the ERA shot up to above 5.00 and in mid-season he went to the Angels for David Sells. There he had a good finish and a nice '76 after which he retired. Jim finished with a record of 69-65 with a 3.07 ERA, a complete game shutout, and 132 saves. His post-season work consisted of a 2.70 ERA in three innings.

Brewer moved right into coaching following his playing career, first with the Expos ('76 to '78) and then, to be closer to home, Oral Roberts University ('79 to '86). Starting in '82 he also picked up some work back in LA, teaching the kids in the minors his screwball in the wake of the Fernando craze. In '87 Jim was killed in an auto accident just shy of his 50th birthday. 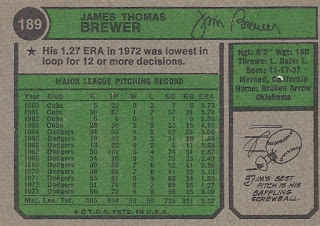 Jim gets only one star bullet but it's a good one. His screwball was devastating when he was on. Once a heckler told Jim that without that pitch he'd be back at the copper mines in Oklahoma. Jim, who knew a few things about his adopted state, told the guy that they didn't mine copper in Oklahoma. When the idiot asked what they did mine there, Jim's reply was "Their own business." Pretty good.