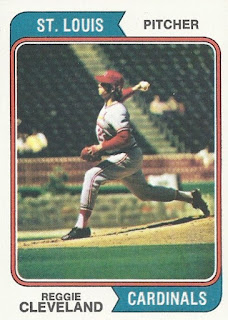 To start, I have nothing against Reggie Cleveland so let's get that out of the way. But in '73 he gets both an action and a "5" card and I think there were much more deserving candidates for the latter honor - the recent Luis Tiant for one. Frankly I didn't think Bill Melton deserved a "10" card earlier either but I came up on all the Harry Caray stuff and let that one slip. But we do have an action card and it's a pretty good one. Reggie here could be a streaky pitcher as he started '73 0-2 and then went on a 12-3 run that would contribute mightily to his best season. By that year Reggie had a triple repertory of pitches - fastball, slider, and curve - and his star was rising, so much so that manager Red Schoendienst tabbed him the club's best pitcher even though he had Rick Wise and Bob Gibson on staff. Here you get to see Reggie's grip on his curveball in what I am pretty sure is Veterans Stadium in Philly. If I am correct, this game is probably from April 22, a game Reggie lost to Steve Carlton. The Phillies were 6-6 and the Cards 1-11, which is the only excuse for this horrible turnout. I count only five people in over 100 seats. That sucks!

Reggie Cleveland was from Saskatchewan and may be the only major league player to date from there. He was signed as a free agent in '65 after a scout saw him throw a no-hitter in a summer league. Reggie was a good athlete and played hockey as well as curled (I guess that's right - he did that curling thing on the ice with the brooms). He took a while to get on track, banging around Single A until '68, when he won 15 with a 2.77 ERA. He won 15 again in '69 at Double A and three more at Triple A. In '70 he won 12, all at Triple A. Both seasons he got some action up top but didn't do terribly well. But in '71 he made the rotation in spring training and had a pretty good rookie year. The Sporting News named him Rookie Pitcher of the Year although neither Topps nor Baseball Digest included him on their rookie teams. '72 started off pretty sweet as Reggie went 11-3 by July but then came back to earth, though he still recorded his lifetime high in strikeouts and innings. 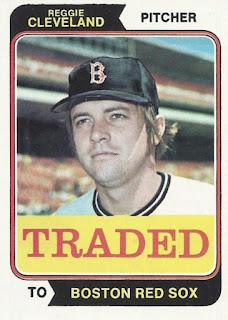 Cleveland was the central piece of the trade indicated here, which moved a bunch of bodies. He was expected to be a big contributor to the Sox staff. In '74 he showed up at spring training overweight and injured from winter ball. He would win 12 but his ERA popped a point and he would be demoted to the pen a couple times during the year. He got off to a crappy start in '75 but down the stretch he would be Boston's most effective starter - he went 4-0 with a 2.21 ERA that September - during the pennant run. That earned him a couple post-season starts (he would go 0-1 with a 6.17 ERA) and in '76 he would have a pretty good year, pulling his ERA back to '73 levels, while winning ten, mostly in relief. He only gave up three homers in 170 innings to lead the league in that department. After a return to the rotation in '77 Reggie went 11-8 but the ERA pushed back above 4.00 and when in '78 the Sox had some new starters on the staff - Mike Torrez and Dennis Eckersley to name two - Reggie was sold to the Rangers.

In '78 Cleveland moved right into the Texas pen and became their ace there, with five wins and 12 saves. It was a short stay, though, and in '79 he went to the Brewers for Ed Farmer. That year was a disaster (1-5 with a 6.71 ERA) but he revived a bit in '80 with some spot starts in addition to the pen work and won 11 with a 3.73 ERA. In '81 his innings declined, his ERA shot up a bunch, and he was shut out from any post-season action. Reggie was released before spring training the following season and hung them up. He went 105-106 with a 4.01 ERA, 57 complete games, eleven shutouts, and 25 saves in his career. He was a decent hitter, sporting a lifetime .211 average.

After his career, Cleveland brought his charm to other businesses, primarily selling cars and real estate. From '91 to '95 he coached in the Blue Jays chain.

The Traded shot is from Candlestick and the black in the hat is too bright. The thing that sticks out though is that Reggie looks a mess. During his career he was a reputed big drinker and he definitely looks like he'd fit right in any of "The Hangover" movies. 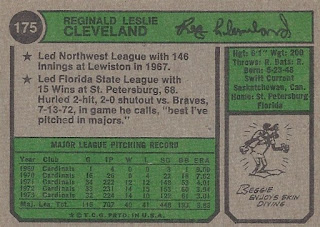 They forgot a star which makes the second bullet confusing until you realize why. I am pretty sure this is the first card with quotes in the narrative. Also, I have dropped commenting on signatures for a while, but this has to be the first one I've seen that starts with a right lean and ends with a left lean. 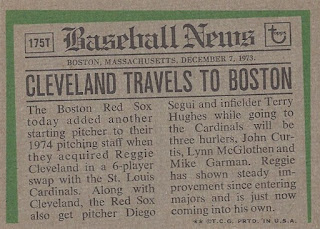 Topps tries a bit of geographical tongue-in-cheek with the headline. Unfortunately their categorization of where Reggie was career-wise wasn't too accurate. He already came into his own: '73 was his best season.

Even though we have two NL guys we get together through that other league: