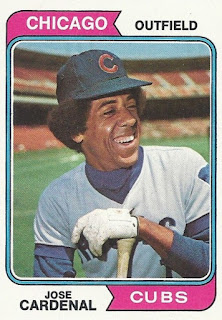 Jose Cardenal gets a "5" card. That's pretty cool since he was in the midst of his best years and has one of the best smiles in the set, laughing away at Candlestick. It's a pretty fitting pose for a guy whose '73 numbers would get him Chicago Player of the Year. Towards the tail-end of his career Mets fans used to call him "Jose Can you See", apparently as a referral to his strikeouts, but I never thought that fair as this guy didn't whiff all that much. But the Mets sucked then so I guess the fans needed an outlet. It turned out that the initial reference was to a spring training game he asked out of because he claimed his eyelids were stuck shut. That plus the time he asked out of a game because a cricket had kept him up all night helped cement his reputation as a kook.

Jose Cardenal was signed by the Giants out of Cuba in '61. He ripped through a season of D ball that year (.351 with 35 homers). After a poor '62 at Triple A he banged 36 at Double A in '63. In '64 he returned to Triple A and hit .289 with 12 homers. But like Jim Ray Hart on an earlier post, Jose couldn't crack the Giants' outfield, getting a total of 20 at bats and before the '65 season he was sent to the Angels for Jack Hiatt. In California Jose would prove to be less of a power guy and more of a speed guy. In '65 he stole 37 bases, hit .250 and made the Topps Rookie All-Star Team. In '66 he would boost his average 26 points but the following year his numbers and playing time came down because of injury. After that year he went to Cleveland for Chuck Hinton. In two seasons for the Indians Jose hit .257 and stole a total of 76 bases. He then went to the NL, traded to the Cards for Vada Pinson. In '70 he topped his previous highs in RBI's and average by a bunch, but in '71 the average dropped huge and he was sent to the Brewers in mid-season for Ted Kubiak. While he boosted his average a bit with Milwaukee, his real achievement that season was a new lifetime high in RBI's with 80. That December Jose was traded to the Cubs for Jim Colborn and Brock Davis.

For the Cubs, Cardenal blossomed. For the next five seasons, '72 through '76 he would average over .300 with 29 doubles and 25 stolen bases per season, while also reporting consistently good OBA numbers. While he had a reputation as a hot dog and a flake he was able to generate some pretty good power out of his relatively small frame. He was also a fan favorite as well as an enervating force in the locker room.

In '77 the Cubs overhauled their outfield, sending Rick Monday to LA, and Cardenal's playing time decreased mightily. Following the season he was traded to the Phillies for a guy I never heard of, Manny Seoane. For a year plus, Jose would do a decent job as a backup outfielder. He got some playoff work in the '78 NL series. In mid-'79 he was sold to the Mets in the middle of a double-header between the two teams. That trade occurred the same day that Thurman Munson died. Jose would break his hand shortly thereafter and miss most of the rest of the season. He would do some pinch-hitting in '80 before being released that August. He was soon picked up by the Royals for help during their pennant drive and would hit .340 for them the balance of the season, again in a limited role. That year he got some post-season time in the Series and he hit .200, missing a couple clutch opportunities. That would be the end of his playing career. Jose hit .275 with 138 homers, 775 RBIs, 333 doubles, and 329 stolen bases. His post-season average was .188 in six games. 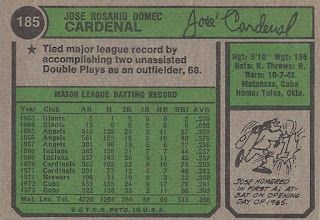 This card is awfully crooked. Jose gets star bullet props for a couple amazing plays in '68. Thanks to baseball-reference a little digging gives the narrative for the two plays: on June 8 a shallow fly by Don Wert allowed Jose to grab Jim Freehan returning to second; and on July 16 with two on Jose made a running catch of a line drive by Chuck Hinton of California - the guy for whom he was recently traded - and kept going, picking off Jim Fregosi. Both plays happened while Sam McDowell was on the hill. Jose is one of very few guys to pull off the Bobby Bonds special in the minors: in '63 he had over 30 homers and 30 stolen bases in Double A and in '61 he pulled the same trick in D ball. He is a cousin of Bert Campaneris. Like Luis Tiant by the time of this set he hadn't seen his parents for 13 years since they were still locked in Cuba. Jose doesn't have the parenthetical name thing going which is odd for Latin guys in this set.

The big trade helps get Jose with the Rangers: