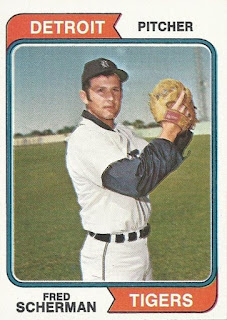 Here's Fred Scherman in spring training, his last one with the Tigers. In '73 Fred suffered in part the downside of fellow reliever John Hiller's continued amazing renaissance from his heart attack as his hill time declined, his ERA popped, and he only had one save. Fred looks pretty sedate standing in a huge outfield posing his stretch shot. I guess he didn't know that his best pitching years were behind him.

Fred Scherman was another Ohio kid who went to Ohio State. He was signed by the Twins after his sophomore season in '64 although he would eventually return to finish his degree. After a successful start in Class A (14-13 as a starter with a 2.33 ERA) he was selected that November in the first year draft by Detroit. He would spend the bulk of the next two seasons in Class A Rocky Mount where he would go a combined 11-13 with a 3.55 ERA. In '67 he hit Double A and in '68 Triple A where his numbers would be excellent - 15-9 with an ERA just above 2.00 - but by now his time was almost exclusively spent in the pen. After a '69 in which he was back in the rotation at Triple A he got into a couple games up top. 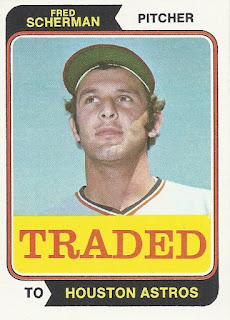 The next few seasons would be Scherman's best in the majors. In '70 he became a regular in the pen, mostly as a middle guy. In '71 he stepped up during John Hiller's absence and had his best season, finishing 40 games and adding 20 saves to his 11 wins. In '72 he put up over 90 innings and had 12 saves along with another nice record. He also pitched well in his short time in the playoffs. Following his reduced '73, this trade took him to the NL.

For Houston, Scherman would not have a great run. Expected to be at least part of the closer solution his record in '74 was 2-5 with an ERA north of 4.00 and only four saves. After a weak start in '75 he was sold to Montreal and put up his best numbers since '72 in long relief duty and some spot starts. He stuck with the Expos in '76 but his ERA bloated to nearly 5.00 and he was released. The next year he hooked up with Pittsburgh's Triple A Columbus team and did OK (6-8 with nine saves and a 3.90 ERA) but couldn't stick. He finished with a lifetime record of 33-26 with a 3.66 ERA, a complete game, and 39 saves. In the post-season he gave up no runs and recoreded a strikeout in an inning of work. In the minors he went 52-47 with a 2.92 ERA.

There is a Fred Scherman Jr. listed in Ohio who does chemical testing for corporate accounts and this Fred apparently got an engineering degree at Ohio State so there's a good chance it's the same guy. Other than that there is zilch out there on his career after playing.

This Traded card isn't horrible. It is a Detroit away uniform shot with a red touch-up around the hat brim. I just saw "Bridesmaids" - very funny - and in this shot Fred has a passing resemblance to the guy who played the cop. 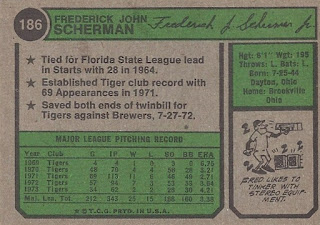 Fred's '71 season was quite good. That year he would finish second to Ken Sanders in the AL Fireman race. He did give up Frank Robinson's 500th home run so he is somewhat immortalized whenever those lists come up. The cartoon is another period one - I don't think anyone "tinkers" with stereo equipment any more. 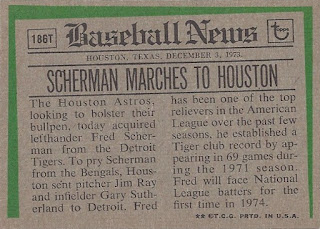 Now this is a Topps faux headline that actually works with its Civil War reference. The Tigers would arguably get the better of the trade as Sutherland would be their starting second baseman for two years. That 69-game appearance wasn't broken until '84 by Willie Hernandez in his MVP season.

Finally, Scherman gets hooked up to Cardenal like this: