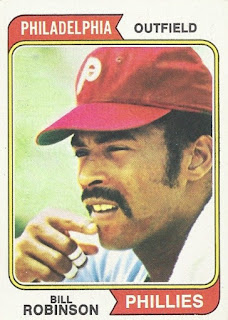 We've been having a decent run of action cards lately and this one is no exception as a thoughtful Bill Robinson surveys a game somewhere. Bill sort of had two separate careers and it took a long while back then for me to realize he was the same guy who played for the Yankees. He was definitely a good example of the redemptive powers of baseball and no season demonstrated that more than '73. Bill finally became an MLB regular again for the first time since the '60s and delivered. He hit everywhere between first and seventh in the order, putting a lot of time in at leadoff in mid-season. Although he would miss nearly all of June with a broken thumb, Bill set personal bests in just about every major batting category except triples.

Bill Robinson grew up in working-class PA where his dad was a steel worker. Bill was a local baseball and basketball star and was signed by the Braves in '61, just out of school. He took a couple years to get on track in the low minors, making Single A in '63 where he hit .316 in rural Georgia, also experiencing segregation for the first time. In friendlier Yakima in '64 he hit .348 and then had a good fall of IL ball. The next two seasons were spent in Triple A where in '66 Bill had a line of .312/20/79, followed by his debut for Atlanta that year. After that season he was sent to the Yankees for Clete Boyer.

Robinson's time in NY was not terribly fruitful. Burdened with the stress of replacing a mainstay on the Yankees' last pennant winners and given the handle "the next Mickey Mantle" - a bunch of guys had to deal with that one - Bill's hitting never really approached his minor league performances. Overall for three seasons he hit .206 with very little power. In the second half of '68 he did raise expectations a bit by hitting close to .290 but after the .171 season in '69 he was sent back down to the minors. In '70 he hit .258 for Triple A Syracuse and he was then traded to the White Sox for Barry Moore. After a Triple A season for those guys in which he raised his average to .275 and rediscovered his power (14 homers and 81 RBIs) he nearly quit when it was apparent he was going nowhere. But the Sox management told him to stick it out and after the season Bill was sent to the Phillies for another no name. He had a bang-up first half of the '72 season - a .304/20/66 line in only 240 at bats - and got a call-up to Philadelphia. There in only 186 at bats he topped his prior best in homers while also ingratiating himself to Steve Carlton by standing in as a faux hitter when Carlton warmed up before his starts in the pen.

In '74 the addition to the team of outfielders Jay Johnstone, Ollie Brown, and Tony Taylor crimped Robinson's time and his average took a hit. He also didn't get along terrible well with manager Danny Ozark so when in early '75 he was sent to the Pirates for Wayne Simpson, Bill was pretty happy.

In '75 Robinson only got 200 at bats, but he hit .280. He also began that year to play some infield at the corners in addition to his regular outfield spots. In '76 the at bats doubled as did almost all his stats and he hit over .300 for the first time at age 33. In '77 he had his best season - .304 with 26 homers and 104 RBIs - while getting some MVP votes. The next two seasons were discounts to '77 but were still pretty good and in '79 he got some post-season action on the Series winner. He did OK, hitting .268 in the Series. Bill hit well in '80 although his playing time declined and from '81 until his career ended in '83 he was mostly a pinch-hitter. The last season and a half were spent back with the Phillies. He finished with an average of .258, 168 homers, and 641 RBI's and in the post-season was a .208 hitter in twelve games. 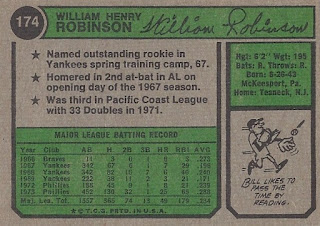 These are telling star bullets. Bill always had excellent spring training camps while with the Yankees, which made his performances during the season so frustrating. That second bullet is what caused the "next Mickey Mantle" tag. The last one is a nice plug but probably a dubious honor when you're in the minors at age 28. Finally lots of writers back then described Bill as professorial so the cartoon fits. Whenever I see his name I think of the kid on "Lost in Space."

These two have pretty common last names so I am going to use a third to help hook them up:

That one is longer than I expected.
Posted by wobs at 11:29 PM