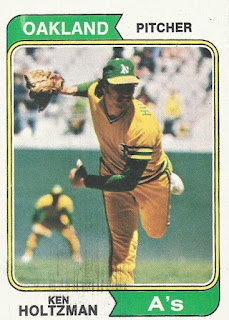 Now these yellow uniforms look pretty cool but that may be because when I was a kid they were associated with a winning team. Ken Holtzman gets an action card to commemorate his best season. his second consecutive All-Star year and his only season of 20 wins. That is either Billy North or Angel Mangual in center behind him at Oakland. Being that Ken was both a left-handed pitcher and Jewish he was of course dubbed by the creative minds of the day "the next Sandy Koufax." So much for original thinking.

Ken Holtzman was from St. Louis where he excelled in baseball. He then played at the University of Illinois where he was All Big Ten in '65 and despite all the activity listed below would graduate in four years with a BA in Business. '65 was also the year he was drafted by the Cubs following his sophomore year and that season he went a combined 8-3 with a 1.99 ERA in Rookie and Single A ball before pitching a few innings up top. In '66 he moved right into the Chicago rotation and put up pretty good rookie numbers, despite going 11-16 (the Cubs went 59-103 that year). He beat Koufax 2-1 the only time he faced him in his career that year and also experienced alternate raves and putdowns by manager Leo Durocher for the first time. '67 would be an interesting season: limited to just twelve starts because of military duty, Ken went 9-0 with a 2.52 ERA and was named one of TSN's Pitchers of the Year. He returned to the rotation full time during '68 but again had a losing record. In '69 Ken began the season 10-1, threw a no-hitter against the Braves and would finish with 17 wins. He got off to another strong start in '70 and matched his prior year win total. That year he also topped 200 strikeouts for the only time in his career. They would be his best seasons with the Cubs as in '71 his ERA bloated and he only won nine games, although he did throw his second no-hitter. He spent a considerable amount of time that year in Durocher's doghouse and not enjoying that too much asked to be traded. He was accommodated, as luck would have it, by being sent to Oakland for Rick Monday.

Holtzman excelled during his time with the A's. He would post a combined record of 77-55, or an average of 19 wins a season. A curveballer who favored groundouts he took advantage of Oakland's better defense in riding his record to four pennants and three Series championships. He excelled for Oakland in the post-season and in '72 was a first time All-Star. Tellingly, he would go to arbitration after every season with owner Charlie O Finley and eventually that relationship would lead to his departure.

Immediately prior to the '76 season the great Oakland Unload began, with Holtzman and Reggie getting sent to the Orioles for Don Baylor, Mike Torrez, and Paul Mitchell. Ken's O career started pretty well but that June he was sent to the Yankees in a big trade with Elrod Hendricks, Grant Jackson, and Doyle Alexander for Rick Dempsey, Rudy May, Tippy Martinez, and Dave Pagan. For the balance of the season Ken won ten games but was not used in the post-season. He was player rep for the Yanks and a ten-year guy by this point, both of which would piss off NY owner George Steinbrenner, since Ken would veto most of George's trade ideas. Over the next year-plus George and Billy Martin would wreck Holtzman's career by only using the pitcher in 23 games over that time span. In June of '78 he would finally be traded - back to the Cubs for Ron Davis - but the damage was done and Ken would go 0-3 in 23 games the remainder of the season. After a 6-9 year in '79 he was released and hung them up. For his career Ken went 174-150 with a 3.49 ERA, 127 complete games, 31 shutouts, and three saves. In the post-season he stepped things up, going a combined 6-4 with a 2.30 ERA and a shutout in 13 games. He hit well in the post-season as well, posting a .308 average with three doubles and a homer (all his post-season hits went for extra bases). 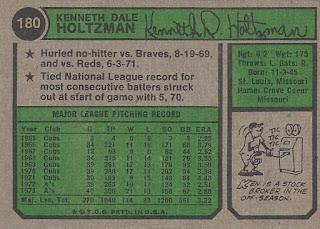 Ken gets props for his no-hitters in his first star bullet. He was economically savvy and he would move right into being a full-time stockbroker when he finished playing. He was also a successful insurance salesman and would be retired by '98. He lives around St. Louis and ran an activity center there and also managed in the inaugural 2007 Israel Baseball League (Ron Blomberg was a manager as well). There is an on-line video interview with Ken from 2008 but my computer crashed when I tried to watch it so beware.

These two Series opponents get the double hookup. For Yogi as manager: