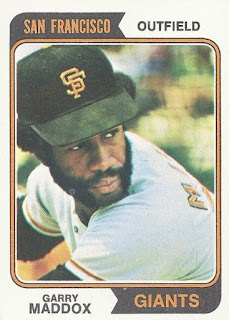 Another action shot and this one is pretty cool. At least the subject's cool as Garry Maddox awaits a pitch at Candlestick. Garry had a big heart, big brains, and big hair when he played. And he had some pretty serious wheels; his nickname was Secretary of Defense for his ability to run down fly balls in center field. With the '73 outfield addition of another Gary - Matthews - this Garry improved big on his very good rookie year numbers by posting a .319 average and setting a career MLB high with 76 RBI's. Garry is one of the more interesting players in the set so let's get to it.

Born in Ohio, Garry Maddox grew up in California and was drafted by the Giants in '68 after a year at Los Angeles Harbor Community College. That season was spent mostly in Rookie ball with a late call-up to Single A. He then experienced a different kind of call-up when he was tagged for military service the next two years, including a year in Viet Nam where he was a perimeter guard in some pretty hot spots. While there Garry was exposed to some chemicals which made the skin on his face and neck very sensitive and made shaving painful. Thus developed the stylish facial hair he sported throughout his career thereafter. He returned in '71 where he put up a very nice season back at Single A Fresno. In '72 he got bumped all the way to Triple A where he was killing it so much that a few games into the season he was promoted to San Francisco, influencing the trade of Willie Mays to the Mets. There, Garry joined Bobby Bonds and Ken Henderson in one of the league's better outfields and put up good enough numbers to make Topps' - and other's - Rookie All-Star Team.

By '74 Maddox was considered an above-average fielder. During that season he decided that he could be much more valuable in the field by moving in substantially, turning a bunch of potential singles into outs. To do this he had to master running back to cover longer hits and this he did, thereby earning his nickname. He was very smart and very fast and was one of very few fielders who could have pulled off that defensive shift. When he played he tended to position himself just beyond the infield for the start of each at bat and adjust his position during the batter's time at the plate. He would hit .284 that year. In '75 the Giants traded Bonds for Bobby Murcer and also acquired Von Joshua, giving them three potential center fielders, a move that didn't make much sense given Garry's success at the position to date. Both his playing time and average dipped early in the season and that May he was sent to the Phillies for Willie Montanez.

It was a superb move for Phiadelphia as Maddox went on to hit over .290 the rest of the season and win the first of what would be eight consecutive Gold Gloves. In '76 he hit .330, came in fifth in MVP votes, and was a big contributor during the first of three successive division titles. In '77 he set lifetime highs in homers with 14, and in '78 he topped 30 stolen bases for the only time. He won a Series ring in '80 and returned in '83. By then his playing time was falling and after a couple more seasons he would retire. Garry finished with a .285 average, 117 homers, and 774 RBIs. He also stole 248 bases and while baseball-reference doesn't show any All-Star listings, I am pretty sure he made at least one team in the mid-'70s. Post-season he hit .271 in 29 games with eight doubles and 11 RBIs. And defensively he ranks in the top 45 for putouts, assists, and double plays in center field.

Maddox really turned it on after he played. He enrolled at Temple University and later received an honorary doctorate degree. He began a concessions company which he later sold. By '95 he acquired a majority interest in and became CEO of a Philadelphia-based furniture company, A. Pomerantz. In 2003 he was named to the Philadelphia Federal Reserve; he's got to be the only former major leaguer to pull that one off. While playing he did a bunch of work for underprivileged kids and victims of violence. That work later segued to his annual BBQ bake-off he holds at the stadium in which proceeds go to his Youth Golf and Academics program. In baseball he has done some spring training coaching and announced for the Phillies PRISM network before it shut down. He's been a busy guy. 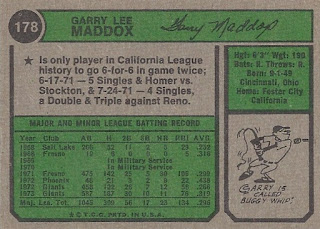 That one star bullet is pretty impressive. I don't ever remember hearing that nickname in the cartoon. Then again I was on the wrong coast. Garry's son, Garry III played ball for a bunch of years in the Nineties, but didn't crack the major leagues. I know I've got some of these suppositions wrong before, but had he, I am pretty sure the Bonds-Matthews-Maddox Giant outfield of '73 -'74 would have been the only one whose kids all played in the major leagues.

Here's a rookie from the next year's set to link these two: