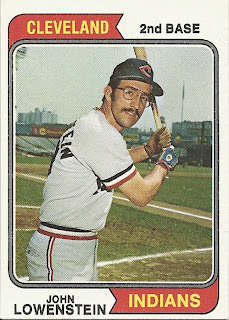 This guy had a carer arc not terribly different from Bill Robinson's of a couple posts ago. John Lowenstein really didn't get things going until his Thirties when he was a member of the very successful platooned outfield of the Orioles. Prior to that his highest profile came from being Jewish and from being the guy who greeted Frank Robinson after Frank's first home run as manager of the Indians. That photo - I've linked to it here - always cracked me up since John looked like he was more ready to shovel snow than play a baseball game. 1973 would be a bit of a mixed season for John. He saw a significant uptick in at bats and boosted his average 80 points and had an over .400 OBA. Despite his designation on the card he was mostly an outfielder during the season. The downside was his involvement in an infamous play: he was one of three fielders who collided chasing a lazy popup by former Indian Tommy McCraw allowing McCraw to get a home run off a 120 foot hit.That couldn't have felt too good but this card at least is pretty funny. It is the first one in which John dons glasses and he looks a little like an accountant at a fantasy league in Yankee Stadium.

John Lowenstein is one of very few major leaguers to come out of Montana. He moved to California as a kid and then attended University of Califormia Riverside where he was All-American his senior year with a .393 average and .488 OBA. Upon graduation in '68 he was drafted by the Indians and then kicked things off in Reno, a Single A team where he played second and third. He stuck there in '69, a year lost mostly to military reserve duty, and after hitting above .300 those two seasons moved up to Triple A for '70. There he shifted to third and shortstop, again hitting very well with a high OBA (his lifetime OBA in the minors was above .390). He also saw some time up top. After kicking off '71 in the outfield for Wichita, he came up for good mid-season, splitting time between second base and the outfield. '72 was pretty much all outfield and by then while he had only hit around .200, John was showing some power with 11 homers in around 300 career at bats.

In 1974 Lowenstein would get the most action of his career, putting up over 500 at bats and demonstrating his versatility in spades by playing all positions except catcher and shortstop. His average tumbled over 40 points though and with a relatively healthy lineup as well as new starters the next few years in Cleveland, John would see a declining amount of action the next three seasons. In '75 he would show signs of things to come with 12 homers in 265 at bats while putting up another .400+ OBA. But after a challenging '76 season, which included a couple trips to the DL, John and Rick Cerrone were traded to the new Blue Jays for Rico Carty who Toronto had just selected in the expansion draft. It was a short stay, however, as John returned to Cleveland before the '77 season started for Hector Torres. '77 would be his final year as an Indian and in early '78 John was sent to Texas with Tom Buskey for David Clyde and Willie Horton. There despite a fast start - over .300 at the end of May - in another season hit by injury he put up a non-descript year in less than 200 at bats and after it he was waived and then picked up by Baltimore.

For the Orioles, Lowenstein would experience a revival. Manager Earl Weaver was a "platooning genius" (John's words) and John would fit into that rotation very handily, playing primarily left field against right-handed pitching. He would switch off with Gary Roenicke at that position. In '79 John hit 11 homers with 34 RBIs in less than 200 at bats for the AL champs. He also won the first game of the AL championship with a homer. In '80 he hit .311 and in '82 he had the best season of his career: a .320 average with a .415 OBA, 24 homers, and 66 RBIs in only 322 at bats. He put up nearly as good numbers in '83 and again provided some timely hits in the post-season, winning his first Series ring. He cooled off a bit in '84 and after a few games in '85 he was released. For his career John hit .253 with 116 homers and 441 RBIs. His OBA was .337 and he stole 128 bases. Post-season he hit .263 with two homers and nine RBIs in 38 at bats.

Lowenstein quickly segued into broadcasting once his playing career ended, being the color guy for Orioles games on Home Team Sports from '85 to '95. He was booted in '96 to make way for Mike Flanagan, which was surprising since he'd won four Emmy awards for his broadcasting. Since then he's been very low profile and living in Nevada. 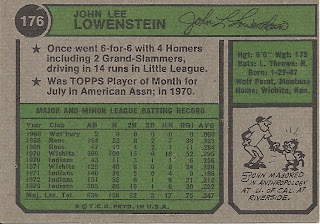 I assume the first star bullet refers to a single game, which would be a first for a card regarding little league in this set. I do not know his stats at Wichita in July '70 but they had a pretty good team, hitting-wise (Chambliss, Richie Scheinblum, Ted Ford). John received his degree in anthropology in '68.

I love these ones. These guys played together: