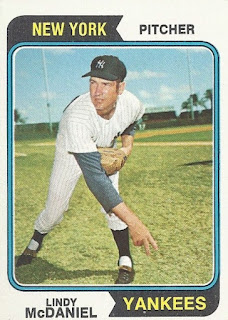 Lindy McDaniel gets a double post near the end of his career. '73 was one of his best seasons at 37 years old. Along with his 12 wins he had ten saves and he pitched 160 innings, the most in a season since his days as a starter. In one game he relieved in the first inning against the Tigers and gave up one run the next 13 innings to win the game. Here in a spring training shot he's showing off his forkball grip on a follow-through pose in sunny Florida. Lindy had three out pitches: fastball, curve, and that forkball, which he threw very low so that when it broke it was already just above the batter's knees. When the pitch truly worked it was virtually unhittable; in one of his early seasons he got 51 strikeouts and gave up only three hits on the pitch. It was a mighty contributor to Lindy's longevity.

Lindy McDaniel was a farm kid from Oklahoma who was a star baseball player in high school and American Legion ball. His senior year in school he threw two no-hitters - and lost both of them! He was a bonus baby, signed in '55 by the Cards for $50,000. He only got into 19 innings that season so '56 was really his rookie year and it was pretty good as he relieved and threw some spot starts. In '57 he was in the rotation and impressed everyone so much that the Cards went and snatched up his younger brother Von as a $50,000 bonus baby also (Von would shut out the Dodgers in his first start, go 7-6 his rookie year, blew out his arm and be done in the majors at 19. He tried to revive his career Rick Ankiel-wise in the minors but didn't hit well enough to make it back.). The next season was a bit of a flop - he spent his only time in the minors that year - so Lindy asked brother Von to teach him his forkball. In '59 armed with his new pitch he moved to the pen and led the league in saves with 15. It was a good prelude to his '60 season when he again led the league in saves, this time with 27, and was the first reliever to receive Cy Young votes, coming in third. He was an All-Star that season and it was also around that time that he began his streak of 225 straight games without an error. But '61 was pretty much a downer, despite his 10-6 record, and Lindy compensated by messing with his forkball. He would start to get things right in '62 when he returned to his original mechanics and double digits in saves with 14. After the season ended Lindy was sent to the Cubs in the deal that brought George Altman and future Met Don Cardwell (fitting) to the Cards. In '63 Lindy gave nearly a repeat performance of his '60 season - both years he was TSN's Fireman of the Year - by winning 13 and saving 23. He would then go through a period of alternating good and not-so-good seasons for mediocre teams. 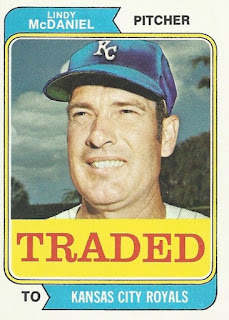 He would also move around a bit . Before the '66 season McDaniel went to San Francisco in a trade that gave the Cubs Randy Hundley and Bill Hands. One would be an All-Star and the other a 20-game winner but Lindy went 10-5 his first season with six saves and helped to stabilize the bullpen. After a disappointing '67 in '68 he went to the Yankees for Bill Momboquette - Lindy definitely won that one - where outside of an off '71 during which he was hurt he put up very nice numbers for six seasons. In '68 he had a streak in which he retired 32 straight hitters. In '70 he had 29 saves. And in '72 he had a nice year as a set-up guy to new bullpen ace Sparky Lyle. After two decent seasons with the Royals following this trade Lindy would hang them up and finish 141-119 for his career with a 3.45 ERA, 18 complete games, two shutouts. and 172 saves.

McDaniel moved right into his next career following playing, a church ministry at which he is still active.

The Traded card appears to be a closeup from the same site as the regular card (note the palm tree over Lindy's right shoulder. But the whole cap is pretty sloppy. Plus Topps really didn't have a photo that didn't highlight the double chin? This card doesn't get to be an ugly one but it comes pretty close. 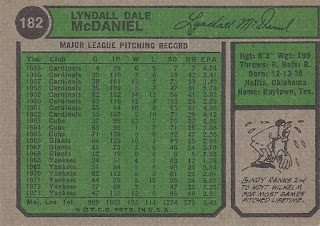 No room for star bullets here. Lindy continued to hold that rank when he retired but he was later passed by others and is now 16th in games pitched behind number 15, Goose Gossage, who gave Lindy props at his HOF induction. Lindy is tied for 17th in games finished and had 119 wins in relief which is second all-time to Hoyt Wilhelm. 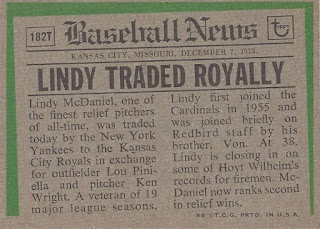 Sometimes the boys at Topps would get clever with the headlines, but I don't think this one really works. This trade was a pretty huge win for the Yankees.

Given McDaniel's duration, this one should be quick: