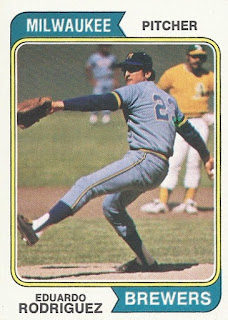 This is a pretty cool card. First of all it is a rookie card for real as '73 was Eduardo Rodriguez' first major league season and appearance. Second, it's an action card which is a great introduction for a kid who had a nice rookie season that included five saves. Third, it is in a recognizable stadium, Oakland's, with a recognizable supporting cast, namely Sal Bando standing on second base and Dave May in center field. Fourth, we can tell where we are in the inning: Bando doesn't even show a hint of running with the pitch, so there are probably two outs which takes us to ...Fifth, we can probably identify the game. It was played on August 18th and was won by Oakland 6 to 3. Rodriguez came in relief of Chris Short (who relieved Jim Slaton) in the seventh inning of what had been a tie game after the sixth. Dick Green popped out, Bill North singled, and Bert Campaneris drove North home with a double. Then Bando singled and Short came in and got Reggie to pop up. In came Rodriguez to pitch to Deron Johnson so there WERE two outs. But Johnson was intentionally walked so that was the real reason Bando was so stationary. Eduardo then walked Gene Tenace, forcing in Campaneris, and then struck out Jesus Alou. So this card is a little like a detective story, at least if you're a baseball dweeb like me.

Eduardo Rodriguez was from Puerto Rico and was signed by the Brewers in '71 by the same scout who signed his teammate Pedro Garcia. In Eduardo's short time in the minors he kicked butt, going a combined 12-8 with a 1.89 ERA, mostly in relief. He came up to Milwaukee in mid-June and was effective in relief and as a spot starter. He also hit a triple in his only major league at bat. He then coincidentally went 7-4 in '74 in the same role and then went 7-0 with seven saves in relief in '75. In '76 Eduardo got 12 starts and eight saves, both career highs, and had a decent 3.64 ERA but he went 5-13. In '77 and '78 he won five each year but his ERA escalated a bit and for '79 he was sold to the Royals. After a season of going 4-1 but with his highest ERA to date he was released, ending his major league career. Eduardo went a combined 42-36 with a 3.89 ERA, seven complete games, one shutout, and 32 saves.

Rodriguez also played a bunch of winter ball in his native Puerto Rico. Like for a lot of other Latin players, there is not very much info on him away from his major league career. He was living in PR when he passed away from a heart attack on what was ironically his 57th birthday. 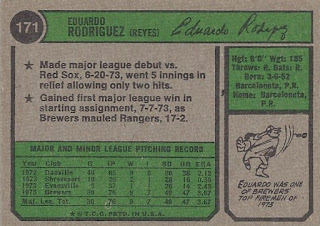 Everything on this card back is from '73. This may be the first time I have seen the word "mauled" used in this set.

These two guys were all AL during their careers so this should be quick: