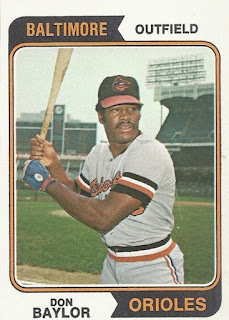 Look how thin Don Baylor is! Hard to believe but when this guy first came up he was as much a threat to steal a base as hit a home run. Or get popped with a pitch. In his sophomore year of '73 this Don capitalized on Don Buford's departure to Japan which gave Baylor more playing time and his numbers picked up pretty well, especially his average by 33 points. It was also a season of firsts: his first season of over 30 stolen bases; his first post-season action; and his first year to lead the league in hit by pitch. For that last stat Don would ultimately lead the league eight times. Here, like many future Yankees, he gets a shot at Yankee Stadium in this set.

Don Baylor was an Austin, Texas kid who excelled at baseball and football in high school. Football would be a big influence on his baseball career: in '66 when he was a safety he made two successive hits with his right shoulder, the first pinching the nerve and the second dislocating the joint. Those injuries would pretty much wreck his throwing arm which would later contribute to his time as a DH. Don went to Blinn Junior College from where he was drafted and signed by Baltimore in '67. He kicked things off pretty well that season with a big year in Rookie ball, then put up pretty much identical numbers between three levels in '68, and then boosted his power a bunch the next year in Double A. Then in '70 he won the TSN Minor League Player of the Year with a big year in Triple A. After another year of similar numbers in '71 he would reach the O's outfield for good in '72 with Frank Robinson's departure to LA. Don's numbers that year were good enough to get him a spot on Topps' Rookie Team that season. His '74 was a pretty good comp to the prior year and in '75 he would set personal bests for Baltimore with 25 homers and 76 RBIs, the best power numbers by an Oriole outfielder since Frank Robinson's glory days.

In '76 Baylor was the other side of one of the big Oakland breakup trades, going to the A's with Mike Torrez for Reggie Jackson and Ken Holtzman. The fans expected Don to take Reggie's place as the big power guy but he wasn't that kind of a hitter. In an otherwise forgettable season, Don would steal 25 straight bases en route to a total of 52 as part of a team that set the single-season record and nearly got to another division title despite reduced pitching. But it was a short stay as Don would be one of the first official big name free agents and go to the Angels, along with teammate Joe Rudi and former teammate Bobby Grich. Hopes were high in Anaheim for '77 but Grich and Rudi got hurt and Don felt the wrath of the fans when another losing season resulted even though he put up comparable numbers to those of '75. He would ratchet things up seriously in '78 (34 homers and 99 RBIs) and then lead California to the division title in '79 with his MVP season. It was also his only All-Star season as he led the league with 139 RBIs and 120 runs while bashing 36 homers. He also played every game including two months during which his shoulder was dislocated. Pretty amazing numbers for a guy that injured.

1980 would be a big disappointment for Baylor as he broke both his wrist and a toe, missed a considerable part of the season, and saw his numbers tumble hard. After the strike season of '81 during which he had a nice bounce, he put up a pretty good year for another division-winner in '82, with 24 homers and 93 RBI's. By then the bulk of his time was spent at DH. He would then go the free agent route again, hooking up with the Yankees for three seasons. Two of those years he won the Silver Slugger at DH and during his NY time he averaged 24 homers and 88 RBI's. In '86 he went to the Red Sox for Mike Easler and in his last full season he won another Silver Slugger - 31 HR's and 94 RBI's - and got plunked 35 times. He also finally won a post-season series. During '87 he got sent to the Twins for their pennant run.That year he won everything and contributed by hitting nearly .400 in the two post-season series. He then went back to Oakland in his final season, again returning to the Series. For his career, Don hit .260 with 338 homers and 1,276 RBIs. He had over 2,100 hits, 285 stolen bases, and was HBP 267 times, a record when he retired. In the post-season he was a .273 hitter with four homers and 21 RBIs in 38 games.

Baylor successfully moved into coaching and managing after he played, starting right up in the majors. He coached for the Brewers ('90 to '91) and Cards ('92) before taking the job as he Rockies' initial manager in '93. In '95 he took the team to a wild card spot and won Manager of the Year. He remained with Colorado through '98 then managed the Cubs from 2000 through half of '02. In between he coached the Braves. In '03 to '04 he coached for the Mets and then the Mariners in '05. After some time away - some doing commentary - he returned as hitting coach for Colorado in '09 and then the Diamondbacks this year. His managing record to date is 627-689. 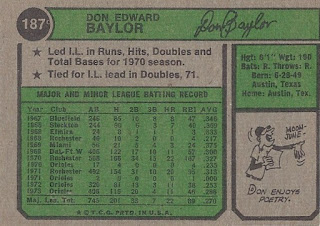 Don's Texas roots are showing in his personal info. He also gets some props for his last two minor seasons. The poetry angle is pretty interesting. His signature looks like he was trying to conserve paper.

Baylor takes a couple guys to get to Scherman: