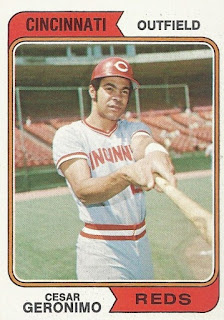 Here we have Cesar Geronimo doing that bat-pointing thing at Candlestick. It's funny how many guys who were mediocre hitters - Cesar is fresh off the worst hitting season of that part of his career - were in that pose in this set. But the guy he shared the center field spot with in '73, Bobby Tolan, didn't have a great offensive year either and after the season would be traded to the Padres, giving Cesar full access to the position. Plus Cesar could field and he had a gun (he'd also have a couple pretty good seasons later at the plate) and a half. He once threw out Cesar Cedeno at home in a game in the DR from 385 feet away. He was instrumental in turning the Big Red Machine into Series winners.

Cesar Geronimo was signed as a free agent from the Dominican Republic by the Yankees in '67. He would only get into a few games in the lower minors that season as the NY organization recognized the strength of his arm and tried to make a pitcher out of him. In '68 they wised up and he put in a more or less full season in Single A where he hit only .194. That December Cesar was selected by the Astros in the Rule 5 draft and in '69 he was elevated to Houston. But he barely played for the Astros and over the next three seasons he would be confined to mostly late-inning defensive or pinch running work. In November of '71 he would be part of the big trade to the Reds where he would enjoy his greatest baseball success.

Initially, Geronimo would share center field with incumbent Tolan. After Bobby's trade, Cesar started off his solo role pretty well, hitting .281 in '74 while topping out in runs and RBI's, but the average tumbled 65 points the following season. When he took over center in '74 he was an immediate hit defensively as well, winning the first of four successive Gold Gloves. Over those four seasons he would also average .278, erasing his offensive liability tag. He would peak at the plate in '76 when he hit .307 with 53 RBIs from the eighth spot. In the '75 and '76 Series he did pretty well also, hitting .290 with two doubles, a triple, and two homers as the Reds won both. From '78 to '80 Cesar would lose playing time to new outfielder Dave Collins and he would then go to the Royals his final three years, where he did defensive work and was released following the '83 season. Along the way, Cesar would be the 3,000th strikeout victim of both Bob Gibson and Nolan Ryan. He ended up hitting .258 with 40 homers and 354 RBI's and his .990 fielding average in center is 34th best all-time. In the post-season Cesar hit .167 with three homers and eleven RBI's in 36 games.

Geronimo would return to the Dominican Republic full-time once his playing career ended and both scout and run clinics for Japanese teams. He has also been involved in institutionalizing baseball in local high schools. 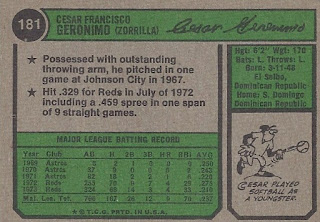 Topps was pretty much grasping at straws to fill in the star bullets here. Cesar had a 9.00 ERA in that one game. He may or may not have been discovered by the Yankees playing softball in the DR.