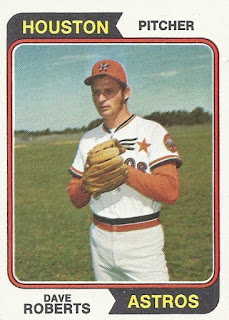 This is one of the set's two Dave Roberts, this one being the pitcher fresh off his best season, in the cow pasture in which most Astros have been photographed. Dave set his personal high in wins with 17 in '73 and he arguably should have been a 20-game winner: in six starts in which he got no decision in the first half he put up a 2.62 ERA in 32 innings so even if you only give him an even record for that span, he got to 20. Just bad luck I guess. At least Dave gets to stand in a nicer part of the park than Preston Gomez or Al Gallagher did. Although he's standing still here, Dave was an itinerant soul while playing and Houston would be his most permanent and successful stop.

Dave Roberts was signed by the Phillies upon departing high school in Ohio in '63. After a nice year at Single A he was snatched off waivers by the Pirates. For Pittsburgh Dave labored the next five seasons while moving up the minor league ladder. He had particularly good seasons in '66 (14 -5 with a 2.61 ERA in Double A), '67 (5-1 with a 2.18 ERA before he got hurt at Triple A), and '68 (18-5 with a 3.17 ERA in Triple A). He was then plucked in the expansion draft by the Padres. In '69 Dave would have an OK season at Double A before being called all the way up to San Diego where he had a less than fruitful season out of the pen. He also re-injured his shoulder which by then had bursitis. Dave began '70 in the pen again but eventually worked into the rotation and, despite going 8-14, knocked a run off his ERA. At one point during the season he had ten straight losses during which time the Padres supported him with a total of 16 runs. '71 would be a big deal for Dave. Although he again had a losing record, he won 14 and came in second to Tom Seaver in NL ERA. He also got a bunch of props from his competition, including a couple Astros, Joe Morgan and Jimmy Wynn. It wasn't too surprising, them, when Houston picked him up after the season for Bill Greif and Derrel Thomas.

Houston was good times for Roberts. In '72, despite his ERA popping over two runs, he put up his first winning season. '73 was very nice as he pulled the ERA back below 3.00. The next two seasons Dave went a combined 18-26, however, as the team's fortunes sort of reversed course. Following the '75 season Dave went to Detroit with Milt May and Jim Crawford for Leon Roberts and a bunch of guys that wouldn't play too long. In Houston he'd averaged 12 wins a year and his first season in Detroit he won 16 with a 4.00 ERA and 18 complete games, his career high. But '77 was a disaster as the bursitis returned along with arthritis in his hands. After going 4-10 for Detroit with an ERA above 5.00 he was sold that July to the Cubs where he came back to earth out of the pen. '78 would be his last season with significant starting time. He also hit .327 for the Cubbies that year. Dave then signed with the Giants as a free agent and put up pretty good numbers before he was part of a big trade: Bill Madlock, Lenny Randle, and he to the Pirates for Al Holland and Ed Whitson. In Pittsburgh he did a nice job - 5-2 with a 3.27 ERA - as the long guy and spot starter. He got some action in the NL championship but not in the Series. In '80 he was sold to the Mariners and in '81 finished things up with a few games for the Mets. Overall Dave went 103-125 with a 3.78 ERA, 77 complete games, 20 shutouts, and 15 saves. In the post-season he threw a scoreless inning and for his career he hit .194 with seven homers.

Dave moved around a bit after baseball. He had done some off-season industrial work on boilers and other welding and steel work. He worked at a detention center and did some volunteer work as a local high school coach. In '96 he presented a trophy to the Potomac State coach for winning the two-year college championship and then became their pitching coach for three seasons. But he later contracted lung cancer from asbestos poisoning from his earlier job and passed away from it in 2009. He was 64. 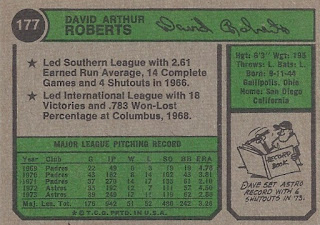 Dave's '66 and '68 seasons were mentioned above. He still holds that team shutout record.

To hook these two up I am going to use a recent post: