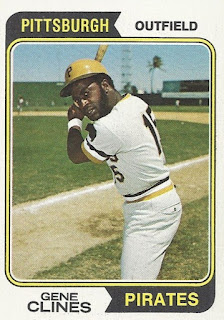 This is another interesting card. In it we have Gene Clines posing during spring training. It may be the Mets' facility but I'm not sure. Also, Gene could hit a ton back then so it was appropriate for him to be holding a bat. The detail of the card that really draws my attention, however, is the black electrical tape on Cline's uniform. The circled number 21 was worn as a patch during '73 in honor of Roberto Clemente who had perished the prior December. Gene's card is the first one with the tape but there will be more. My hunch is that in spring training the team had not yet had the opportunity to get the patch on all the uniforms and the black tape was a temporary fix. Gene revered Clemente and 1973 must have been an emotional roller-coaster for him. After Clemente's death he was the logical choice to replace Roberto in right field. However the club, partly in a sentimental gesture, put Manny Sanguillen out there to start the season. About two months into that experiment the Pirates dismantled it and gave the job to Gene. He was hitting above .290 when he injured his ankle running the bases. He did a serious number on his tendons and while he was able to return to the lineup he hit under .230 the remainder of the season. So for poor Gene, '73 was memorable, but not in good ways.

Gene Clines grew up in California where he was an excellent high school athlete. He took his game to Contra Costa College, a Cali community school, where he played outfield and pitched. He was drafted by the Pirates in '66 and had a monster season in Rookie ball, hitting .358. After an abbreviated and average season at Single A in '67 he spent the next three seasons honing his hitting at Double A and raising his average from .241 to .310. At the tail end of '70 he played a few games in Pittsburgh and hit above .400. He was a very good defender and had a very clean quick stroke which enabled him to hit well over .300 the next two seasons as the Pirates' fourth outfielder. It was a status that Gene would seemingly play forever as all the Pirates regulars - Clemente, Oliver, Davalillo, and Stargell - could hit pretty well also. In '71 he did receive a start in a historic game - the Pirates starting lineup that day was all minorities.

In '74 it was apparent that his injury had done permanent damage to his game as Clines hit only .225 and after the season was traded to the Mets for Duffy Dyer. After another low-average season, Gene was sent to the Rangers for Joe Lovitto. In '76 he started for Texas and pulled his average up 50 points, enjoying his best season since '72. For the '77 season he was sent to the Cubs for Darold Knowles and while he was back to a back-up role he did hit .293 with the highest RBI total - 41 - of his career. He filled the same role in '78 although his average dipped 35 points. In '79 he got some token at bats and ended his playing career. Gene finished with a .277 average. He was not nearly as successful in the post-season, recording an average of .118 in nine games.

Gene's post-playing career began before his playing career ended. In '79 he was signed as a coach with the Cubs which he did through '81. He then worked as a hitting instructor in the Houston system through '87, moving up to the major league club in '88. From '89 through '92 he assumed the same job in Seattle where he guided Junior and from '93 to '94 did the same gig in Milwaukee. He then moved to the Giants ('95 to 2002), where he tutored Barry Bonds and Jeff Kent, and in '03 returned to the Cubs where he stayed through '06. Since '07 he has had different assignments for the Dodgers. 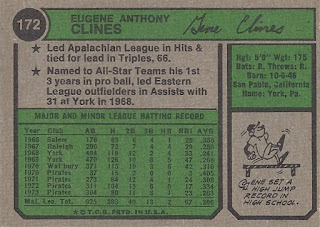 Gene gets props for his early work in the minors with the star bullets. He was originally drafted to pitch but his bat work put a fast end to that. Gene was only 5'8" in high school so the high jump record is pretty impressive.

This will be an AL and NL hookup: