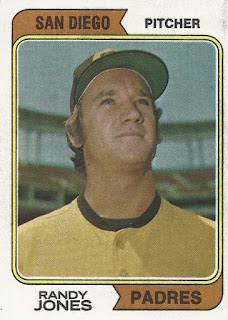 This is the rookie card of Randy Jones. Being a low-numbered Padre, Randy gets a two-fer. He looks pretty magnanimous at Jack Murphy Stadium but that's OK since he won a pitching spot on the Topps Rookie All-Star Team that year (so he's pitcher two). Randy's whole pitching career was basically built around his two wonderful seasons in the mid-'70s but let's not get ahead of ourselves.

Randy Jones grew up in Brea, California and wanted to play for the Dodgers. He went undrafted out of high school though as two guys he played against - Steve Busby and Al Hrabosky - were snapped up. Randy then attended Chapman College where, due to an arm injury, he had to refine his pitching game from primarily heat to placed pitches. He was drafted and signed by the Padres in '72 and had a pretty quick rise up. By the end of that year he was in Double A and after a super start there in '73 he was moved up to San Diego. His move there was also helped by the sale of Fred Norman to the Reds that season, as the Padres needed a lefty starter to fill the gap. In going one game over .500 Randy set the then club record for winning percentage by a lefty and made the Topps team. 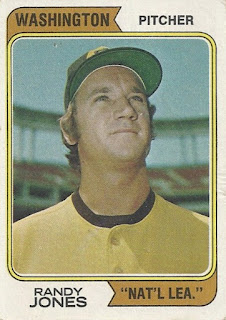 '74 would be tough for Jones. His money pitch was a sinker that only hit the mid-'70s but could move up and down. Most of his outs were therefore groundouts and the Padre infield of '74 was pretty porous. Top that off with declining confidence and Randy's record fell to 8-22 with a 4.46 ERA. In 17 of those losses the Padres put up two or fewer runs and the bullpen was pretty dreadful. Going into '75 Randy worked with pitching coach Tom Morgan to re-establish the sinker and refine his slider. Both would prove hugely successful when in '75 after a middling start Randy caught fire and won 20 games while leading the league with a 2.24 ERA. While Randy threw a slow pitch he worked quickly and his games averaged less than two hours. In '75 he threw a complete game on 68 pitches. Randy would finish second to Tom Seaver in Cy Young votes, make the All-Star team and win Comeback Player of the Year, which was a bit silly. In '76 the magic continued as Randy would be 15-3 by the All-Star break. He started that game, ultimately went 23-14 with a 2.74 ERA, and won the Cy. He tied a record by throwing 68 consecutive innings without giving up a walk. He would throw 315 innings that season and in his last game snapped a nerve in his upper arm that left him unable to flex his bicep. Unfortunately for Randy that injury set the tone for the balance of his career.

After baseball, Randy moved around a bit career-wise. He did the real estate thing and also owned and ran a group of car washes. He then moved into food service and would travel worldwide seeking concessions on military bases. In the Nineties he returned to the Padres as a community rep and also opened a barbecue stand at the stadium. Away from that he has been running a baseball school - one of its graduates is Barry Zito - and does some radio work for the Padres. 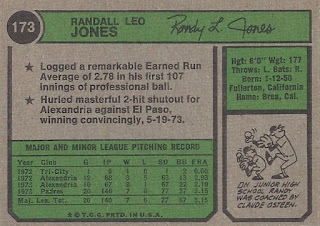 The adjectives are flying in these star bullets. That's a cool cartoon. No wonder he had Dodger blue in his eyes.

This time we go all NL: