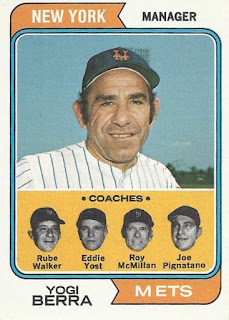 Hey, it's Yogi! In pinstripes! The wrong kind, for old-timers, but he doesn't seem to care. Yogi is the first HOF player to have a manager card in this set (we already had Walt Alston but he went to the Hall for his managing). In fact Yogi just made the Hall in '72 about a year before this photo. 1973 would be one of those character-building years for Yogi. Plagued by injuries to every starter except Felix Millan, his Mets were still in fifth place in the NL East at the end of August. And Yogi had to listen to a month of rumors about how Billy Martin was going to replace him (ironically that did happen but not for another ten years and for a different team). But good pitching kept his guys close and a 19-8 tear in September won them the division. Then he surprised the Reds in the NL championship and took the A's to seven in the Series. For all that he was rewarded with a crappy team in '74 and a dismissal the following season. But he was still an icon.

Even in '73 Yogi Berra had already been around baseball forever, having been signed by the Yankees in '43 out of his St. Louis high school. After a season in the B Leagues he went overseas for WW II at 19 and saw some pretty serious action. He returned in '46 and hit .314 with 15 homers and 59 RBIs in half a season at Triple A Newark. He was up top by the end of that season and by the end of the following season was NY's regular catcher. Then followed 15 All-Star games, three MVP seasons, lots of World Series, and lots of malaprops. Yogi played for the Yanks through '63, moved to the coaching side and managed them to a Series in '64 and was then fired and replaced by the guy who beat him that year, Johnny Keane. Yogi then moved across town to Shea and coached for Casey Stengel. He also played a little bit in '65 which was his last season as a player. He finished with a .285 average, 358 homers, and 1,430 RBIs. In 2,120 games he only struck out 414 times. In the post-season he hit .274 with 12 homers and 39 RBIs in 75 games.

Yogi coached the Mets from '65 to '71. When Gil Hodges died of a heart attack before the '72 season began, Yogi was named to take his place. He managed the Mets most of the way through the '75 season and then went back to the Yankees to coach. He did that through '83 and then managed the Yanks for '84 and a couple games into the '85 season. Then George Steinbrenner fired him and replaced him with Billy Martin. Yogi avoided the Yankees for a long time after that and wouldn't return to The Stadium until George apologized. Yogi's managerial record was 484-444. He later coached for the Astros and in some way, shape, or form has been connected to baseball ever since. 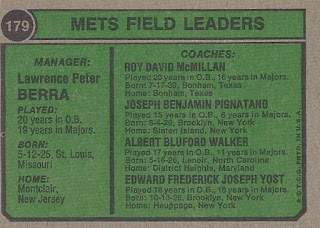 Roy McMillan I talked about on the Mets' team card. The link is here.

Like a bunch of coaches on other posts, Joe Pignatano began his baseball life as a Dodger. Signed by hometown Brooklyn in '48 he spent three years in D ball. He must have had pretty good wheels because in '50 he hit 17 triples. He then lost a couple seasons to military duty and returned to B ball in '53. He worked his way up the Brooklyn system reaching Triple A in '57 and then playing a couple games for the Dodgers at season's end. He spent the next three seasons backing up John Roseboro at catcher in LA. In '61 he was sold to the A's for whom he had his biggest season (.243 with four homers and 22 RBI's in 243 at bats). He was then traded to the Giants for Jose Tartabull - Danny's dad, although that's getting to be an old reference too - and after playing very little that July went to the Mets. His last at bat that season he hit into a triple play which pretty much summed up the season for both Joe and the Mets. After putting in some time at Triple A for the Mets and Baltimore he was done. He hit .234 with 16 homers and 62 RBIs in 307 games for his career and in the minors hit .259. He moved right into coaching, hooking up with his friend Gil Hodges in Washington ('65 to '67) and then following him to the Mets in '68. He was with Gil when the manager had his heart attack. Joe stuck with the Mets through '81 and became famous locally by planting a vegetable garden in the Shea bullpen. He then coached in Atlanta - with Joe Torre - from '82 to '85. He coached a couple more seasons in the minors and then retired. He still lives in Brooklyn.

Rube Walker was signed by the Cubs in '44 out of high school in North Carolina. Like Yogi and Joe, Rube was a catcher. From '44 to '47 he climbed the Cubbies' chain . In that last season he hit 22 homers at Double A while hitting .331 (he hit nearly .300 during his minor league career) which got him up to Chicago in '48. He hit .275 his rookie year backing up Bob Scheffing. It would be the highest average of his career. He continued his reserve role until mid-'51 when he was part of a huge trade that moved him and Andy Pafko to the Dodgers for a bunch of guys. Both Rube and Pafko were on the field for the Bobby Thomson playoff homer that year. Rube backed up Roy Campanella through '58 when he was released. He hit .227 for his major league career. He then became a manager in the LA chain, playing as well his first couple seasons. From '59 to '64 he went 418-466 running Double A and Triple A teams. His career arc then pretty much paralleled that of Piggy above: Washington ('65 to '67), the Mets ('68 to '81), Atlanta ('82 to '84). He then scouted for the Braves and the Cards until he passed away from lung cancer in '92 at age 66. Rube was credited with developing the great NY arms during his tenure as well as instituting the five-man rotation the Mets frequently used.

Eddie Yost was also signed in '44, he by the Senators. He'd attended NYU - he was from Brooklyn - and would eventually get a Masters in PE there. He never played in the minors and between some token at bats for the Nats in '44 and '46 he pulled his WW II military stint. He became the regular third baseman in '47, a position he held until prior to the '59 season when he was traded to the Tigers to make way for a new third baseman, a guy named Harmon Killebrew. While in DC Eddie led the league in doubles once and in walks four times, recording a superb OBA. His nickname was "The Walking Man." He led the league in walks both seasons in Detroit as well, where he also had his two highest homer totals. Griffith Stadium in DC was huge and it was thought that if Yost had played his whole career in Detroit, he would have had at least 100 more homers. After the '60 season, he went to the Angels in the expansion draft and was their first ever batter. After two seasons in LA he was done as a player, finishing with a .254 average, 139 homers, and 683 RBI's. He walked over 1,600 times and his OBA was .394. He returned to Washington to coach for the new Senators, first under ex-teammate Mickey Vernon and then under Gil Hodges. He too followed Gil to NY where he coached through '76. He then went to Boston where he stayed through '84. He then retired to Wellesley, Mass where he still resides. Eddie has a very interesting baseball-reference bullpen page. It is pretty brief but the author knows his stuff about baseball.

Since Yogi played forever I get to do the double hookup, first as manager: