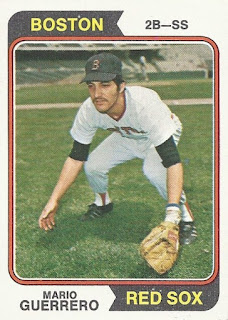 Here we have Mario Guerrero's first solo card. He gives us his infielder pose in Oakland in front of a huge pile of dirt so it's probably early in the season. Mario would be the guy who got between two longer player stints at shortstop for the Sox: Luis Aparicio and Rick Burleson. In '73 he came up top and as a rookie provided infield backup in the middle. He would knock in the game-winner in the first Carlton Fisk/Thurman Munson brawl game and generally fielded pretty well. He would prove to be a bit combative himself but we'll get to that below.

Mario Guerrero was born in the Dominican Republic and was signed there by the Yankees in '68. He would alternate good and not-so-good hitting years for them as he moved through their system reaching Triple A Syracuse in '71. He had consistent trouble in the field - his pre-season scouting reports in both '72 and '73 indicated he needed to work on his range at shortstop - but improved his errors total substantially in '72 when he also put up his finest hitting numbers. Ironically that season he was the player to be named later - this would be a pattern - in the Sparky Lyle for Danny Cater trade earlier that year with Boston so he finished up at Louisville, then Boston's Tripe A affiliate. He had a rookie card in '73 on which he was paired (trioed?) with Pepe Frias and Ray Busse, two NL guys to be.

Coming out of spring training in '74 Guerrero was named the winner over Rick Burleson as heir to Little Louie at shortstop. He would start a bit more than half the games that season while bettering his average a few points and again providing decent defense. But he was dissatisfied with the way things were going and would hold out during '75 spring training. Bad move and Mario would be sent - for a player named later - to the Cards also for Jim Willoughby. With St. Louis in '75 he did a little time in Triple A Tulsa while up top he hit .239 in a backup shortstop role.

Guerrero's stay in the NL would only last one season as he would be sent to the Angels for Ed Jordan and a player to be named later, Ed Kurpiel (both career minor leaguers). The next two seasons for California would be his best offensively with a .284 average as he split starting time with the other inhabitants of the revolving door at shortstop (see Rudy Meoli from a couple posts back). After the '77 season he would leave California - the team, not the state - and sign with the Giants as a free agent. Right before the season began in '78 he was the player to be named later as the last of seven guys and cash sent to Oakland for Vida Blue. That year Mario would be the outright starter at shortstop, taking over from the lighter-hitting Rob Picciolo, and hit .275 in what was by far his busiest season. In '79 the younger Picciolo returned and outhit Mario, winning back starting rights. In '80 Billy Martin became manager and was a fan of Mario's fiery nature, returning his starting status and naming him co-captain with Dwayne Murphy. While Murphy's appointment worked well, Mario was apparently anything but a stabilizing force in the locker room and with only a .239 average for the seaaon was sold to the Mariners that December (I wonder if the cash came later?). Seattle would release him before the start of the '81 season. The line on him was this: a .257 average with 170 RBIs. He did put the ball in play striking out only 150 times in his career.

After his playing time ended, Guerrero would return to the DR and would work as a sort of independent talent scout. His name would appear in headlines in the Nineties when he sued some of his "discoveries" that later went to the majors for a percentage of their earnings. Just recently he was named as part of a group running a baseball camp down there. 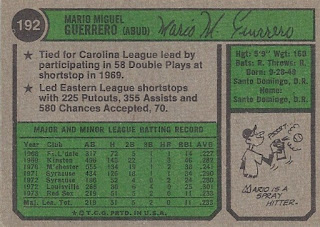 Ironically Mario gets props for his defensive work in the minors. The cartoon is a bit of a reach since his stats already dictated that bit of info. On this card Mario is listed as 5'9". By '76 - see here - he gets upgraded to 5'11". His maternal name would be familiar to Wall Street guys back then. It was the trading symbol for Anheuser Busch. Maybe his brief time in St. Louis was destiny.

Mario is the last of a short AL run. I get to use a former Pilot: