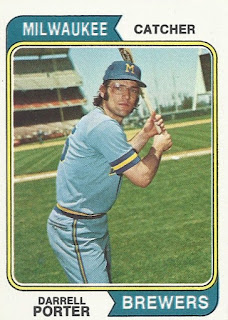 Darrell Porter has his shot taken in Oakland during his true rookie season. Darrell had already had two cards at this point - a multi-player rookie card in '72 in which I'm pretty sure he was switched with the guy next to him, Jerry Bell; and a solo card in '73. He would earn the catching nod for the Baseball Digest rookie team over the Topps choice of Bob Boone and finish third in AL ROY voting. He was a bull of a player, tough on the basepaths, willing to participate in collisions on both sides, and often playing hurt. Darrell would have a pretty dramatic career, although not all for the right reasons.

Darrell Porter was born in Missouri - a state he would return to as a player - and grew up in Oklahoma. In high school he was an all-state quarterback at the same school from which Bobby Murcer came. Darrell signed to play football at Oklahoma but got whisked away as a first rounder by the Brewers in the '70 draft. His rise through the minors was pretty quick: a couple seasons of A ball and a '72 at Triple A Evansville. While his overall hitting was nothing special, he put up pretty good power and excelled defensively. He got some late looks in '71 and '72 then came up for good his rookie season. In '74 he would get more playing time after starter Ellie Rodriguez moved to California and although his power stats came in a bit Darrell earned his first All-Star nod. In '75 and '76 he continued as the primary starter but his offensive numbers came in on what were generally pretty poor teams. It was in Milwaukee that he developed the routine of snapping the ball to first base after every strikeout he caught.

After the '76 season Porter joined Jim Colborn in a big trade that sent them to Kansas City for a bunch of guys. In KC Darrell's career took off as his average and power jumped on a significantly better team. In '77 he hit .275 and experienced his first post-season action, hitting .333 against the Yankees. In '78 he would return to the All-Star game while reaching new highs in homers and RBIs - 18 and 78 - and better his previous year's playoff numbers by hitting .357. In '79 he would put up amazing numbers reaching double figures in all extra-base categories, scoring 101 runs, grabbing 112 RBIs and leading the league with 121 walks. He hit .291 with a .421 OBA. At the time he was only the sixth catcher to go over 100 in both runs and RBIs in a season and the double-figure number was made a big fuss of although I cannot remember the details. The Royals did not make the post-season that year so the numbers weren't extended. Unfortunately it would be Darrell's best season by far as the following year he checked himself into rehab for drug and alcohol dependency. He did that after a dugout visit by Don Newcombe in which Don gave a lecture about his own issues with alcohol and then gave a ten question quiz. According to Newcombe if any three answers were positive, the respondent had a problem; Darrell answered yes to all ten. But '80 wasn't a complete wash as he got another All-Star nod, put up better than average offensive numbers for a league catcher, and went to the Series where KC would lose to the Phillies.

In '81 Porter left the Royals as a free agent and was signed by St. Louis. The Cards had traded their decade-long starter Ted Simmons to the Brewers and had also acquired Gene Tenace. Darrell and Gene would split time at catcher the next couple seasons and those two seasons Porter's numbers would approach his worst in Milwaukee. But '82 brought St. Louis a Series winner and Darrell won MVP for both the NL playoffs and the World Series. In '83 and '84 he would get a bunch more time and improve his offense, although his strikeout totals would ratchet way up. In '85 he split starting time with Tom Nieto and returned to the Series, this time losing to KC (both of Porter's St. Louis Series appearances were against his old teams). After the season the Cards turned Darrell lose and he would sign with the Rangers for whom he spent two seasons doing backup work at catcher and DH. He hit .247 with 188 homers and 826 RBIs. He also had a .354 OBA. In the post-season he hit .267 with a .378 OBA in 37 games.

After playing Porter ran an antiques business and did some motivational speaking as well as some broadcasting work which he was gearing up to do when in 2002 he crashed his car in Missouri. He would have a heart attack during that incident which would be fatal due to a high level of cocaine in his system. He was 50. 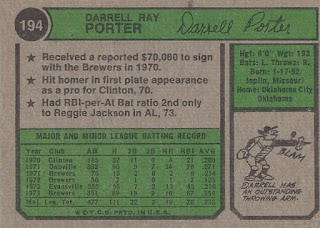 Darrell has informative star bullets, which is a nice change. Clinton was the first Single A team for which he played. That must have been a trip for an 18-year old. His QB experience allowed him to develop a fierce throw to second. He was one of very few catchers to wear glasses when he played. He was always a great tough-guy role model for us wanna be bespectacled baseball players.

I'll use another important '73 rookie to help out here: