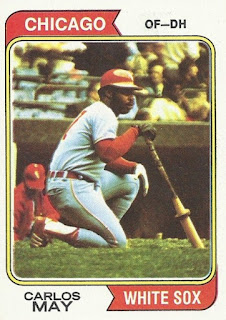 Here is a nice on deck shot of Carlos May, probably in Yankee Stadium, a future home. Assuming the bat Carlos is holding is the one he used during the game, I'm pretty surprised its use was allowed given the pine tar on it almost reaches the tip. It's certainly a lot higher (lower?) than it was on George Brett's bat during that infamous dispute. Anyway Carlos looks pretty thoughtful during the best two-year run of his career in the States. His number was 17 so his uniform in full read May 17th. He may be the only guy who played with his birthdate on his back. I believe that is Chuck Tanner behind him.

Carlos May was drafted by the White Sox as a first-rounder in '66 out of high school in Birmingham, Alabama. A thick guy who could run pretty well, Carlos was an immediate hit in Rookie ball, hitting .426. He slowed down a bit the rest of the season at Single A but the following two seasons at that level he hit .333 and after a short look during '68 jumped all the way up to the Sox for good in '69. He would have an excellent rookie season, putting up 18 homers and 62 RBIs by early August when he was called to Marine reserve duty. In California he was a swabber for the artillery (the guy that cleans the mortars between launches). He was cleaning a mortar whose shell hadn't gone off and unfortunately caused it to explode in the mortar tube, causing him to lose his right thumb. Bob Watson - of all people - is reported to have found the thumb but too late to re-attach it. Carlos' season was obviously over and he immediately went to the operating room and rehab although there were serious doubts about his ability to use his hand again. But his '69 numbers were good enough to get him an All-Star nod, third place in AL ROY voting, and a spot on the Topps Rookie Team of '69.

May had a very intensive rehab over the winter of '69-'70 which even incorporated his wife hitting him grounders. He was able to not miss a beat, putting up very similar numbers in '70 to his rookie year. In '71 he moved to first base from the outfield and saw his homer total fall off but did continue to boost his average. In '72 the Sox acquired Dick Allen so Carlos returned to the outfield, hit .308 with a .405 OBA and earned his second All-Star appearance. In '73 the average came in a bunch but Carlos put up his best power numbers. Late that season he would be injured - I believe it was a knee - and his stats would generally decline thereafter. In '74 his power numbers got cut roughly in half and '75 saw a bit of a rebound as he again put in most of his time at first but lost about 100 at bats to nagging injuries.

In early '76 May was traded to the Yankees for Ken Brett and Rich Coggins. For NY Carlos would primarily DH, a job he performed pretty well during the pennant run. He got his first taste of post-season action but went hitless in the Series blowout to the Reds. After a diminished role as DH in '77 he was sent to the Angels before the end of the season. After a few at bats there Carlos was done in the majors. He hit .274 with 90 homers and 556 RBIs in 1,165 games. His career OBA was .357 and he hit .105 in the '76 post-season.

In '78 May went to Japan to play for the Nankai Hawks for three-plus seasons. His numbers were pretty good there, averaging about .315 with 23 homers and 77 RBIs per season. When he returned to the States in '81 he went back to Chicago where he worked for the central post office for a bunch of years. He also has done community work for the Sox and served as hitting instructor for the Cook County Cheetahs, an independent team. There is a fairly recent interview with him here. 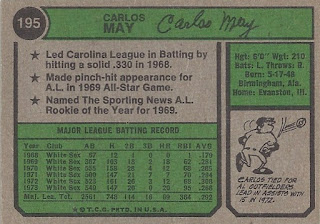 Carlos gets some excellent star bullets on his card. Signing his name must have been tough since he was a righty. He was surprisingly fast and Dick Allen taught him how to run bases (he would have 85 stolen bases in his career). His brother is, of course, Lee May, a guy we'll be seeing later. Carlos would lose the official ROY award to Lou Piniella, with whom he was a teammate in '76 and '77.

Outside of Tom Walker we are in a long AL run. It will help: