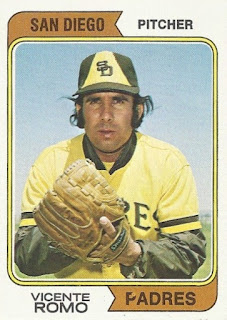 This guy has what may be the most informative Baseball-Reference bullpen page I have seen thus far of the players in this set. The author appears to hold Mr. Romo here in a venerated light but I certainly have my favorites also. I will be borrowing from his contribution pretty liberally for the narrative. On these cards Vicente takes a break from his favorite fielding pose. He is a season away from having a Traded card which would have made this a very crowded post. Prior to the '73 season Vicente went to the Padres for Johnny Jeter where he shared closing duties, recorded seven saves, and posted some of the best numbers for any San Diego hill guy. Vicente would have a very long career, only a fraction of it being in the States.

Vicente Romo was from Baja and began playing in the Mexican Leagues in '62 upon finishing school. Purchased by Cleveland following the '64 season from Mexico City, he would have a not particularly great '65 at Triple A Portland. He then did a round trip, returning to the Tigers in '66 and giving Portland another shot in '67 which also did not go so well (those two seasons he went a combined 5-16 with an ERA above 4.20). Prior to the '68 season the Dodgers snapped up Vicente in the Rule 5 draft and pitched him for an inning before returning him to the Tribe. In '68 the numbers at Portland improved significantly and during the season he returned to the majors, this time as an Indian. His rookie stats were excellent as he recorded twelve saves in his 40 games and put up an ERA to match teammate Luis Tiant's. He also had a dramatic windup very similar to the one Tiant would develop with a big turnaround motion on the mound. 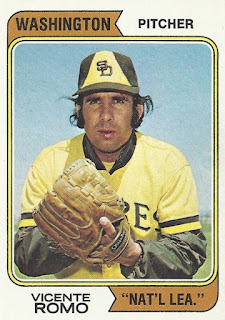 In '69 after a good start, Romo was traded to the Red Sox with Joe Azcue and Sonny Siebert in the deal that brought Ken Harrelson to Cleveland. For Boston he would continue with good stats, posting eleven saves while also picking up some starts. In '70 he continued his dual roles, turning his record around even though his ERA shot up. Prior to the '71 season he was sent to the White Sox with Tony Muser for Duane Josephson and Dan Murphy. In Chicago Vicente would pitch for legendary coach Johnny Sain as he returned to the pen primarily as a middle reliever. While his record wasn't great, his ERA was better than league average.  In '74 his ERA shot way up although he upped his save total to nine. He also had control issues, recording more walks than strikeouts and he was released the following March. He returned to the Mexican League for a bunch of seasons. In May of '82 LA bought Vicente and pulled him all the way up as a starter and reliever and at age 39 he did pretty well, going 1-2 with a save and a 3.03 ERA in 15 games. That would be the last appearance of his career in the States. Vicente went 32-33 with a 3.36 ERA, four complete games, a shutout, and 52 saves.

Romo's true success was found in Mexico. Playing primarily in the Pacific Mexican League, he pitched there through '86 in both summer and winter ball. He is the league's record holder in career wins, strikeouts, complete games, and ERA. He won 182 games in that league and all told more than 400 wins during his career. He was elected to the Mexican baseball Hall of Fame in '92 and worked as a pitching coach there following his retirement as a player. He is currently a coach for Olmecas de Tabasco. 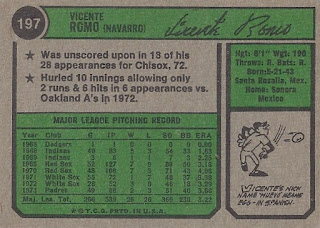 Vicente gets mention for his '72 season since that year the Sox gave Oakland a pretty good run in the West. His nickname was courtesy of his head, which a coach in the minors likened to an egg. It was pretty big. Vicente's brother Enrique was also a pitcher up top. I remember him having a nice rookie year for the Mariners in '77.

Finally back to the NL, I lean on the other league for the hookup: