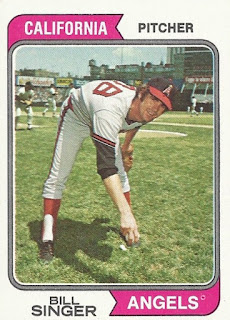 We follow up a card with a pose on it bent at the waist with another bent at the waist shot, this time of a pitcher. Bill Singer gets a "10" card which deems him special goods. He certainly did have an excellent '73, winning 20 and putting up a bunch of strikeouts. Mr. Singer shows us his follow through at Yankee Stadium. If he normally held on to the ball that long, no wonder he had some issues during his career. One of them was that due to his pretty stunning comeback, he was accused from time to time of throwing a spitball, among other notorious pitches. In fact, the Yankee Stadium setting is pretty ironic since the complaint given the highest profile was from Yank manager Ralph Houk. One time as Bill was putting on his warm-up jacket when on the bases a tube of toothpaste and a toothbrush fell out of his pockets. Immediately some suspected nefarious reasons for their presence but I think Bill was just practicing good oral hygiene. That number on his back is huge. I guess some teams were still using those "TV number" uniforms in '73.

Bill Singer was a hot property as a high school baseball player in Pomona, California. A big guy with a huge fastball he was headed to the University of Arizona when the Dodgers stepped in and snapped him up to the tune of a $40,000 bonus in '61. Since he was only 17 when signed he had to wait a year to start off which he did in C ball in '62 going 9-3 with over a strikeout an inning. But his ERA was pretty high and he also gave up a bunch of walks. During the next three seasons, one in Double A and two in Triple A, Bill worked through his control issues and improved his win totals (his losses rose also) as he added a slider and a change-up to his pitching array. He also hurt his shoulder in '63. In '66 he put up a nice season at Triple A Spokane, going 13-11 with 217 strikeouts (up 90 from the prior year) in 233 innings as his ERA fell a run to 3.48. He also had an operation on his pitching shoulder that year which was apparently so enlarged that it restricted blood flow in the artery that ran through it. A rib had to be removed to relieve the pressure. I guess one could be too strong for his own good.

In '67 Singer was ready for life at the top, all healed from his operation, with his control issues solved. He had an excellent rookie year, going 12-8 with a 2.65 ERA and going nearly three to one on his strikeouts to walks ratio. In '68 he had a losing record but the Dodgers were pretty bad that season and his other numbers were very good. He also picked up a curve that year. Then he wowed them in '69, grabbing 20 wins and 247 K's in his best season. He also got his first All-Star nod that year. But in '70 things started falling down. Early in the season he got hepatitis, apparently nearly dying and missing two months. He returned, threw well, and then broke a finger on his pitching hand on the basepaths and had that fixed by having a knuckle removed. It seems every time Bill got injured he lost a body part. He actually had nice numbers in between his ailments but in '71 and '72 he seemed to suffer the after-effects going a combined 16-33 as his ERA climbed and his control issues resurfaced. When the big Dodgers - Angels trade went down after the '72 season, Bill was a part of it and moved to Anaheim.

Singer's big '73 season got him back to the All-Star game and things seemed back on track even though his walk totals were almost double what they were in '69 when he pitched exactly the same amount of innings. In '74 he got off to a fast start before he went down with back problems and had to have lumbar surgery. That followed with a pretty disastrous '75 in which he had calcium deposits removed from his elbow, went 7-15, had an almost 5.00 ERA, and walked more guys than he struck out. After the season he went to the Rangers for Jim Spencer and cash. He started off well for Texas, going 4-1 in ten starts with a 3.48 ERA. He was then part of the trade that got Bert Blyleven out of Minnesota and he then went 9-9 with a 3.77 ERA for the Twins. While his strikeout to walk ratio now seemed stuck at one-to-one, it was a pretty good comeback season. So thought the new Blue Jays who made Bill one of their picks in the expansion draft.

Singer would start the first Toronto game ever, getting a no-decision in a win, but things went south pretty quickly as his back and shoulder problems recurred and general ineffectiveness followed. He would go 2-8 in '77 with a 6.79 ERA. While he would hang out with the Blue Jays through '78 he wouldn't pitch again. His final tally was a record of 118-127 with a 3.39 ERA, 94 complete games, 24 shutouts, and two saves.

Like many California-based ball players Singer would move into real estate and by 1990 he had his own commercial real estate company. He was also very active in local Little League and Connie Mack ball, in '83 establishing a league in Newport Beach and then in '90 starting an Orange County league. He would also hook up with major league ball again in administrative positions. Beginning in the '80's he scouted for the Dodgers, Marlins (early '90's to 2002), and Pirates ('02 to '03). He was then hired by the Mets as assistant to the GM but that gig only lasted a couple weeks since he was canned over some insensitive remarks he made to a Dodgers employee. In '05 he got a scouting gig with Arizona then moved with GM Mike Rizzo to the Nationals after the '06 season. He is still Washington's director of Asian scouting. 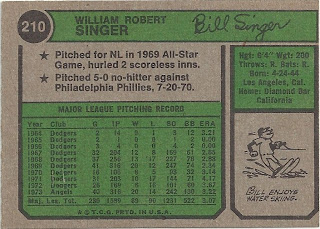 These are some good star bullets. The no-no nearly ended up a perfect game. Bill issued no walks and the only guys to get on base were Oscar Gamble (HBP) and Don Money on an error. He struck out ten in the game. I like how they focus on the '69 All-Star game; in '73 he gave up three runs. Like Steve Renko, Bill must have been a sight on skis.

This one is easy: