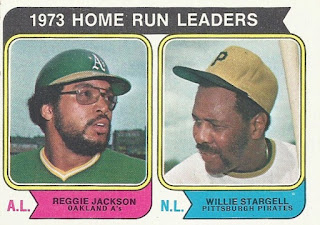 The next league leaders card gives us a look at the AL MVP and the guy who many thought should have been the NL MVP. Reggie Jackson appears to be at future home Yankee Stadium and Willie Stargell - who knows? Somewhere windy perhaps, since he appears about to lose his hat. Willie had a fine season in '73 but not for a division winner, which is probably what allowed Pete Rose to beat him out for MVP. These guys both had long productive careers and are both in the Hall. in this age of regular inter-league play it is pretty amazing to think that outside of a few All-Star games, Reggie and Willie never played against each other. 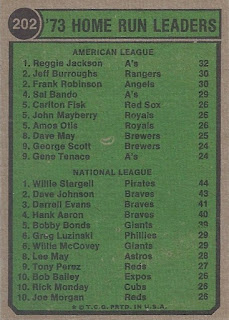 Reggie led the AL with 32 homers. Outside of strike seasons and war years, that amount is tied for the lowest total to lead the AL going back to 1919, when Babe Ruth led with 29. 32 homers would lead the AL six times, including '74 when Dick Allen had that many. '73 was the middle of what many call the Second Deadball Era, a claim that might be boosted by these low totals. Again, despite its emergence this year, only one DH makes the top ten, Frank Robinson of California. Three A's, two Royals, and two Brewers make the list; ironically all three teams were strong in the pitching department that year. Dave May shows up again as does rising star - at least for a little while - Jeff Burroughs. Not to be outdone by arch rival Thurman Munson, Carlton Fisk makes a leader board here as well.

Again, the NL kicks the AL's butt in league leader totals. Reggie would only have come in sixth place in the NL. Like the batting leaders and the AL homer leaders, the West takes center stage in the power department, getting eight of 12 spots. Willie's total would represent the last of five consecutive seasons of 40-plus for the NL leader. Then you have the three Braves, pulling off a first by teammates with 40 or over. It's pretty amazing that Atlanta had a losing record in '73, but they had almost no pitching. We don't get a division winner representative until Tony Perez in ninth place. Davey Johnson's the only guy really overstepping his normal power limits here. And these guys are up there: Greg Luzinksi and Darrell Evans are the only guys whose careers began in the '70s.
Posted by wobs at 11:59 PM