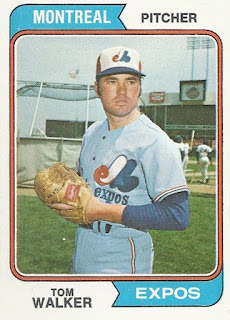 Tom Walker gets a shot at - for a change - Shea Stadium. The cool thing about this particular photo is that it has Willie Mays in the background. Tom has on his game face and gives us a good view of the old Expos logo. It clearly shows the "M", "e", and "b." 1973 was Tom's sophomore season and during it he bettered just about all his rookie numbers except his ERA and had four saves in what could probably be regarded as his best year. Tom is a bit far from all the NY guys but in the photo it looks like he is trying to overhear their conversation.

Tom Walker grew up in Florida and then attended Brevard County Community College from which he was drafted by the Orioles in '68. He apparently threw quite well in school and his journey through the minors was very successful as he was a combined 34-26 with a 2.59 ERA as a starter during three years of A ball and one of Double A. Following the '71 season he was grabbed by the Expos in the Rule 5 draft and the next season he made the jump from Double A to the Montreal bullpen and had a pretty good rookie season. In '74 Tom would split time between Triple A (5-0 with a 1.35 ERA) and back in Montreal where he would get in less games but start eight of them. After the season he would go to Detroit with Terry Humphrey for Woody Fryman.

In '75 Walker's ERA would jump to above 4.00 as he again got some starts but only went 3-8 for a pretty bad team. Before the '76 season he was sold to St. Louis and for them he would strictly relieve. Up top Tom only got into ten games; most of his year was spent back in Triple A where he went 9-5 with a 3.76 ERA. Before the '77 season he was released and he then returned to Montreal as a free agent. Again he barely played up top (1-2 with a high ERA in 19 innings), but went 7-0 with a 1.97 ERA as a reliever in Triple A Denver. He was then selected off waivers that June by California finishing badly on both levels. That would be his final year of pitching as he went 59-33 with a 2.84 ERA in the minors and 18-23 with a 3.87 ERA, a complete game, and eleven saves up top.

When he was done playing Walker settled in the suburban Pittsburgh area. His son, Neil Walker is now a rising star second baseman with the Pirates. 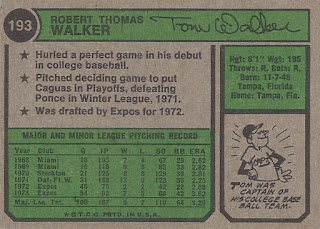 Tom - or Robert - has some tidbits regarding his pre-major league days although that last star bullet is redundant. That's a hell of a way to kick off a college career; I bet Tom felt right at home pretty fast after that game. He is also related by marriage to Chip Lang, another former Expos pitcher.

I'll use Detroit and Boston to tie these two together: