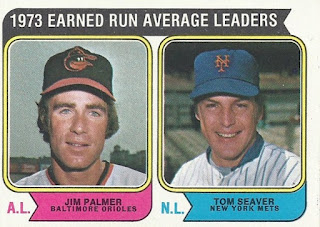 Back to New York with the two Cy Young winners of '73, Jim Palmer at Yankee Stadium and Tom Seaver at Shea. They both look pretty happy and they almost faced each other in the Series again in '73. These two always seemed to be close to the top in ERA in the early to mid-Seventies and Palmer seemed a lock to win 20 every year as well. We are also back to two HOF players leading the league. Palmer was just starting his new work in advertising and Seaver was getting busy with his vineyards. I guess these guys had reason to be happy. 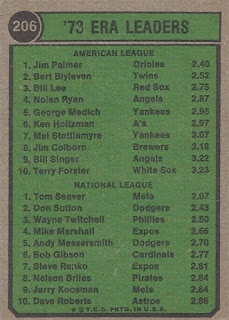 This is another statistical category where the NL kicks the AL's butt. Despite what I said up top about Palmer and Seaver, ERA lists tended to be pretty random back then. Bert Blyleven was a regular and so was Nolan Ryan for a couple years but the rest of these guys were not normally visitors to the top ten. There are a couple Yankees which seems to belie what I said on an earlier post about their pitching back then, but after Doc Medich and Mel Stottlemyre there was nothing in the rotation. A bunch of the 20-win guys are here and check out number ten. Terry Forster, a reliever, makes the list. It's been a long time since something like that happened.

The NL swamped the AL in homers and ERA by its leaders. That's a pretty weird double. These are some numbers as we don't get anything close to 3.00 on the list. Seaver beats Don Sutton by almost half a run. Again a reliever makes the list with Mike Marshall at number four. Outside of Steve Renko and Wayne Twitchell, these guys would be on this list multiple times, even Dave Roberts who had a stunning ERA for the Padres in '71. There are two Dodgers and a Dodger-to-be which sets the table for the '74 pennant winner. And two Expos and two Mets; the NL champs finally get some major representation.
Posted by wobs at 11:59 PM