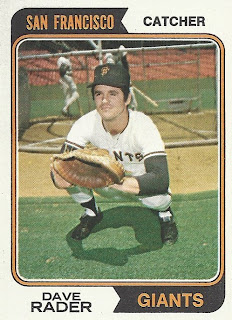 Dave Rader gets to demonstrate his catcher's crouch for the second year in a row, this time next to the batting cage at Candlestick. On his '73 card he had an action shot. Dave would enjoy a pretty decent '73. Fresh off his big rookie year - see below - his average dropped 30 points but his OBA went up by 20 points. Dave seems small here but I could be mistaken. More on that on the back of the card commentary. There are a couple other Giants in the background. The one at the plate looks freakishly thin and tall and may be missing a head. I cannot tell who either he or the guy reclining on deck is, but they seem at ease.

Dave Rader is yet another future player who migrated to California as a kid, he from Oklahoma. Dave was a standout at both football and baseball and was drafted in the first round by the Giants in '67 out of high school in Berkely. He started off in Rookie ball hitting .301 though his specialty would be defense. By '71 he was hitting .314 in Triple A and demonstrating some decent power, punching 20 doubles in under 300 at bats. Up top incumbent catcher Dick Dietz had a big season in '70 but then got hit hard by being player rep - lovely how the owners used to crucify those guys back then - so by '72 there was room for Dave and Dietz would be sent to LA. Dave had a nice year, batting .259 and continuing to play well behind the plate. He won the TSN Rookie Player of the Year and came in second in NL ROY voting to Jon Matlack. But he didn't make anyone's rookie team because '72 was also the year a certain Boston catcher made his debut. He was a pretty good contact hitter and would only strike out about once every 15 at bats during his career. In '74 and '75 he would hit .291 each season but lost playing time, first to Ken Rudolph, and then to '75 rookie Marc Hill. In '76 he hit .263 but was by now splitting time with Hill. All three seasons his OBA would be around the .345 mark.

In '77 Rader was traded to the Cards with Mike Caldwell and John D'Acquisto for Willie Crawford, John Curtis, and Vic Harris to be Ted Simmons' backup. He again hit .263 - he seemed to like the paired averages thing - but was on the road again after the season, this time to the Cubs, with Hector Cruz for Steve Swisher and Jerry Morales. In Chicago he won the starting gig but unfortunately only hit .203 and then was heading yet farther east, this time to Philly with Manny Trillo and Greg Gross for Ted Sizemore, Barry Foote, Jerry Martin, and some other guys. At least he wasn't lonely during his many moves. In Philly he assumed Foote's role as backup to Bob Boone, not playing too much and hitting .204 (pretty close). Finally, after the '79 season he was sent to Boston - about as far east as he could get - for Stan Papi to back up Mr. Fisk. In his final season Dave hit .328. While he was signed in '81 to a free agent contract by the Angels, he wouldn't play for them. Dave finished with a .257 average with 30 homers and 235 RBI's.

Chasing down Rader's life since baseball has been tough; I've got nothing. 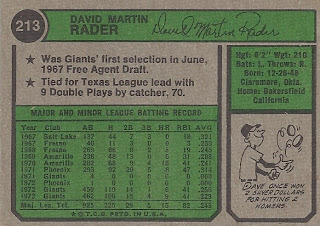 Dave gets a star bullet for his defense and a slice-of-life type cartoon. Money-wise, he also helped pay for pitcher Ron Bryant's huge teddy bear which was apparently his inspiration in winning 24 in '73. What some catchers won't do to help out their aces. What throws me are his personal stats: 6'2" and 210 pounds. Everywhere else Dave is listed at under six feet and about 165 pounds so either he had a one-year experiment with 'roids or Topps got his measurements messed up. According to his Topps card in '75 Dave had an unassisted DP in April '73 in which he sprinted to second base to get the second out. Now that would be a great YouTube moment.