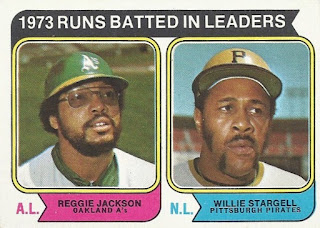 Reggie and Willie are both back. This time Reggie looks nearly angelic in Oakland while Willie looks like he just heard something mildly disconcerting at Candlestick. They both have the earflap-less helmets on which is, I guess, appropriate for a hitting leaders card. And both guys have photos from different shoots than on the homer card: Reggie has the windbreaker thing going and Willie is sporting much more serious muttonchops. This card's pretty crooked by the way, but is oddly so on the short ends. Normally the cards get crooked on the long ends. See how far one can stretch when he needs filler? 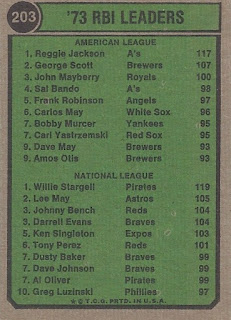 Now these leading totals are a lot tighter than the homer ones were. The NL still holds an advantage but it's not a romp. Not surprisingly, most of the AL guys were on the home run leaders list. Only Carlos May, Bobby Murcer, and Yaz didn't make the homer cut. Outside of the two - unrelated - May's there are no real outliers here, although '73 would be Frank Robinson's last big power season. Apparently Amos Otis' ribbies all accrued to the Brewers which is the first time I have seen that arrangement. Back to guys named May, I know the Dimaggio's pulled it off in '41, but this may be the first time since then that two brothers were on the league leaders for RBI's.

In the NL four guys on the RBI list were not on the homer one: Johnny Bench (surprisingly), Ken Singleton, Dusty Baker, and Al Oliver. Hank Aaron just missed this list with 96. The Braves had four guys with over 90 RBI's and they couldn't post a winning record. That has got to be a record of its own but I'm too swamped to check. The old Big Red Machine was still cranking things out with it's three power members - Bench, Lee May, and Tony Perez - still occupying top spots on the board. At least all the NL guys are on the correct team.
Posted by wobs at 11:59 PM