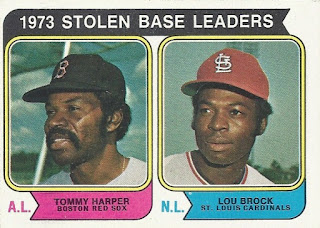 Here are some new faces in Tommy Harper and Lou Brock. I can't tell where they are although Lou could certainly be at Shea and Tommy appears to be next to an away batting cage. This was Tommy's second and last time leading the league in stolen bases; it is Lou's seventh of eight times to do so. Mr. Harper is the first guy on these leader cards not to be in the Hall away from Pete Rose, who certainly would be had he had different hobbies. And Lou was just warming up in '73 for his big year the following summer. 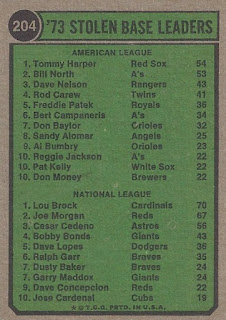 Here again the AL falls pretty far back to the NL, at least in each league's top three. In both of Tommy Harper's league-leading seasons he was well above his norm. A bunch of these guys would be regulars on this list but there are some surprises. Reggie? And Don Money. That last one is really surprising and will invite a closer look at his stats when the blog visits his card. A bunch of little guys make this list, notably Harper, Freddie Patek, Sandy Alomar, and Al Bumbry. Once again the Oakland boys are well represented. This race was the closest of the four offensive ones represented by this set. Billy North would up his total significantly in winning the '74 title.

The NL had another tight race but gets beat out by homers in the thinnest margin department for the league. Lou would put up three seasons of 70-plus. There are no real surprises on this list although the inclusion of a number in the teens seems like an anomaly for the times. I believe Davey Lopes and Bumbry are the first rookies representing both leagues among the leaders to date. Cesar Cedeno was truly cranking then; Joe Morgan, the guy above him, once said that if Cedeno was a Red he'd be the best player in the NL. Yet again multiple Braves are represented. Need I say more?
Posted by wobs at 11:59 PM