Poor Mike Kekich. He'd been underground all these years and had to resurface this year when a couple of Red Sox fans - that hurts - decided they were going to make a movie based on his life. In this shot taken in Oakland it looks like he has just heard the news: Matt Damon and Ben Affleck announced earlier this year that they are making a movie based on the (in)famous family swap Fritz Peterson and Mike enacted with each other before '73 spring training. It WAS the 70's. Mike doesn't want the movie made and is trying to block it. Frankly I don't think there's enough there but what do I know. When the Peterson-Kekich swap was announced it was decided the two players should be split up which meant that Mike - by far the worse pitcher - was traveling. He went to Cleveland for Lowell Palmer early in the '73 season and it was a season to forget as Mike got very little starting time for the Tribe and his numbers went the wrong way in a hurry.

Mike Kekich grew up in San Diego and was signed by the Dodgers in '64, a year out of high school. Mike had an excellent fastball but could be a bit wild. His first season at Single A was pretty good as a starter but he walked nearly a batter an inning. He also struck out over a batter an inning including 11 straight in one game. So the Dodgers thought they had something and to prevent his loss to the Rule 5 draft they promoted him to LA for all of '65. There in only a few innings he did nothing special and in '66 he was back in the minors. He got hurt that season only throwing a few innings but came back strong in '67, going 17-5 with a 3.01 ERA split between Single and Double A. That would get him promoted to LA for real in '68 where he joined the rotation, had a less than stellar year, and was traded to the Yankees after the season ended for Andy Kosco.

Kekich would spend his best years in NY and over the next four seasons went a combined 30-31 with an improving ERA. He would work his way from spot starting to a regular spot in the rotation in '71 and '72.  In '74 he was released by the Indians in March and then would travel for real - all the way to Japan to pitch for the Nippon Ham Fighters. While there he would sign a free agent deal with Texas and return to the States to throw a few games at Triple A Spokane. After a strong start there in '75 - 7-4 with a 3.40 ERA - he came up, threw 31 innings, and posted his only season of better than league-average ERA. But the Rangers cut him the following March and he went down to play ball in Mexico. In '77 the new Seattle Mariners bought him and that year he threw all in relief, putting up a 5.60 ERA with three saves. But he WAS the only Mariner pitcher with a winning record (5-4). When they released him in spring training of '78 that was it for him in the majors. He would pitch the '78 season in Triple A going 9-4 but with a high ERA in 65 games. He finished his major league career with a record of 39-51 with a 4.59 ERA, eight complete games, a shutout, and six saves. In the minors he was 44-26 with a 3.84 ERA.

In '79 Kekich coached and played in Santo Domingo in the DR in the Inter-American League. He then returned to Mexico where he was still pitching in '82 when SI did a profile on a bunch of guys there. While south of the border Mike attended medical school which he used to eventually set up a business in Arizona that performs health checks on insurance policy holders. He did that for a bunch of years and then apparently moved into real estate as well. He has intentionally kept a very low profile until this year when he was discovered by reps for the Affleck/Damon team who were searching for advisors for their movie (tentatively called "The Trade"). He gave an emphatic no. 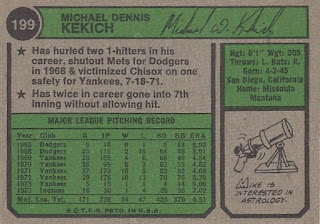 The middle initial in Mike's signature looks a lot more like a W than a D. One wonders if the two star bullets are referring to the same games. I could probably check but that would be too much work. Mike was also a big skin diver and parachutist.

This will be a relatively long one: