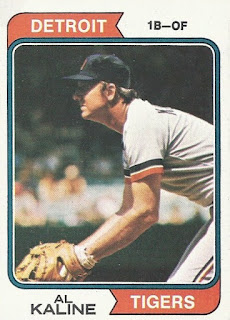 This is the final regular card of Al Kaline's career. He would get a feature card in the '75 set as a tribute to his joining the 3,000 hit club, but there would be no more stats for Al. Here he gets an action shot in what may be Comiskey as he gets his game face on at first base.Al missed quite a it of time to injury during his career so that he got to that magic 3,000 number is very impressive. '73 was one of those seasons as between his two DL stints he missed almost two months. Ironically the only two other seasons he missed as much time were '68 and '72, both post-season years for Detroit during Al's run. But being the gamer he was, he would make up for those lost games in spades with his series stats. And he did all that on only one good foot.

Al Kaline came out of a Baltimore high school right to the major leagues, signed as a bonus baby by the Tigers in '53 for $35,000. Al hit well over .400 during his HS career despite the fact that a childhood condition and corrective surgery forced him to run on the side of his left foot, which would continue through his MLB days. Unlike many of those big bucks signees Al never played a game in the minors and by '54 was starting in the Detroit outfield. In '55 he became the youngest player ever to win a league batting title - he was 20 - by hitting .340 and leading the league with 200 hits and in total bases. He came in second that year to Yogi Berra in MVP voting. In '56 he had his best power season and in '57 he won the first of what would be ten career Gold Gloves. The Tigers weren't too hot of a team in the Fifties and though Al hit well, he would only cross the 100 RBI mark one more time. After very good seasons in '58 and '59 he had a protracted slump in '60. Also, by then Detroit had acquired Rock Colavito and Al decided he'd go less for the big power numbers and be more of an on base guy. A nice bounce followed in a '61 in which AL led MLB with his doubles total and won AL Comeback Player of the Year. '62 looked like it was shaping up to be his best power year ever if he didn't miss so much time to injury. Then came his big '63 in which he again finished second in MVP voting followed by two seasons impacted by injury, although in '64 he spent zero DL time. Two good years followed in '66 and '67 with Al missing a month the second year with a broken hand.

In '68 Detroit finally made it to the post-season, but for a large part of that year the Tigers got there without Kaline, who lost over two months to a broken wrist. Al was able to come back in time for the pennant run but by then Detroit was set in the outfield with Willie Horton, Mickey Stanley, and Jim Northrup. To get Al back in the Series lineup manager Mayo Smith moved Stanley to shortstop for the Series, benching regular Ray Oyler and it worked like a charm as Detroit won in seven. Al hit .389 for the Series with eight RBIs. Al would then have three solid seasons and in '71 returned to the All-Star game - he'd been in every one from '55 to '67 - and in '72 he got some MVP votes as the aged Tigers made the playoffs, though he again missed some time. In '74 Al upped his at bats by being the team's exclusive DH in getting his 3,000th hit; he would finish with 3,007. He also made his last All-Star team. For his career he hit .297 with 399 homers, 1,583 RBIs, and a .376 OBA. In the post-season he hit .333 with three homers and nine RBIs in 12 games. Defensively he was a star as well as he resides in the top ten all-time for putouts from right field and the top 25 for assists and double plays. He was elected to the Hall in '80, his first year of eligibility.

Kaline stayed with the Tigers after his playing career ended. From '75 to 2003 he was the team's color guy in the broadcasting booth. Since then he has been an admin guy for the team. 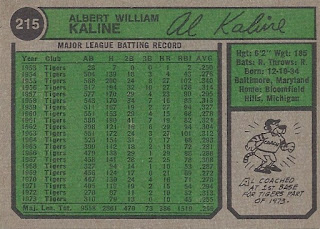 Al has an interesting name, when you resort to Google to do your research like I do. Along with some posts on Al you get lots of stuff about batteries. Al has a great card back except that '73 was his first year of lifetime sub-.300 career average since his rookie year. He did that coaching work while he was injured. During his baseball career Al partnered with Gordie Howe to run an auto supply group. He has a SABR bio.

A lot of Al's contemporaries stuck around forever so this may be tough: