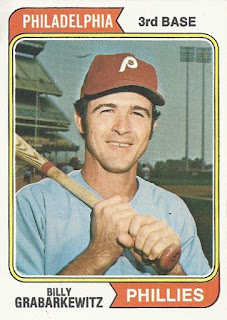 Now this is a smile. Sandwiched between Billy G's two horribly airbrushed jobs we get a happy Grabs - I am obviously avoiding spelling the last name - at Shea. This gap-toothed smile would precede that of other future NY luminaries like David Letterman and Sandra Bernhard. Billy began '73 as an Angel but while in a new league Grabs really couldn't get things going for the Angels, which was too bad because shortstop was pretty much up for grabs (no pun intended). He stayed in California as a backup through August and then went to Philadelphia in a trade that would eventually bring Denny Doyle out west. For Philly he again did backup work - for the guy for whom he'd been traded - but at least boosted his average 100 points. I believe this is the first card in which we get to see an airplane taking off in the background. Given the smog-ridden day evident in the background, I am sure the people on that plane were happy to be going anywhere.

Breaking the string of recent posts, Billy Grabarkewitz was a born and bred Texas kid who wouldn't get to Cali until he was an adult. A great athlete, Billy was initially a quarterback in high school with a big gun but at only about 5'6" he couldn't see over his linemen's heads. His last two years he moved to baseball which he then continued in college, first at Southwest Texas State in '65 and then St. Mary's in '66 (Danny Heep also played at the latter school). He was drafted by the Dodgers out of St. Mary's. He began well enough that season and then started cranking in '67 in A ball, hitting .289 while playing shortstop. He could hit for power and was a speedster, stealing 90 bases his first three seasons in the minors. He struck out a ton but also walked a bunch and would leave behind an OBA of over .420 in the minors. In '68 he moved up to Double A and was hitting over .300 with 31 stolen bases through half the season when he was involved in a nasty collision with catcher Hal King. It left Billy with a broken ankle that was so bad it was a week before it could even be set. Rehab was long and lasted into the next season at Triple A where he moved back to second with reduced mobility. And the huge stolen base totals were now done.

In 1970, Grabarkewitz came up to play third base for LA. He essentially replaced prior-year rookie Bill Sudakis who moved to catcher. This Billy took off from the start and by mid-season was hitting over .300 with 50 RBIs. LA went with a big write-in campaign to get Billy in the All-Star game which was hindered in part by fans' inability to spell his name - most just wrote in "Billy G." It worked as Gil Hodges named him a reserve and Billy got a key hit in the 12th inning rally that wrecked Ray Fosse. While his production tailed off the rest of the season, he still led the team in homers and OBA (.399) and finished second in RBI's. But early in '71 he hurt his shoulder and when he returned his spot was covered by Dick Allen and new youngsters Bobby Valentine and Steve Garvey. Plus Billy's hitting never got on track so that by the time he was more-or-less healthy in '72 he was relegated to backup duty as his average continued to plummet. The following winter he would be part of the big trade with California that brought Andy Messersmith to LA and sent Frank Robinson to the Angels.

Grabarkewitz started slowly in '74, barely playing in an infield now replete with starters who rarely sat. In July Billy was sold to the Cubs as one of a bunch of second basemen to take over in the wake of the Vic Harris failure. He would hit OK in that role - .248 with a .358 OBA - but still strike out a bunch and with the '75 acquisition of Manny Trillo be released before spring training was over. He hooked up with Oakland for whom he played primarily all over the infield for their Triple A Tucson club, hitting .279 with an almost .400 OBA and cutting down on the K's. He got in a couple games up top but that December was released, ending his time in baseball. Billy finished with a .236 average and a .351 OBA.

After baseball Grabarkewitz returned to Texas where among other things he founded Southwest Alliance Marketing, which may or may not be involved in local real estate and apparently worked in insurance. He also joined a group called the Pro Players Foundation that works to bring sports to underprivileged kids. 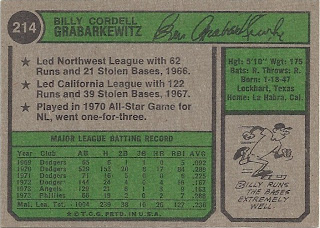 As noted in the star bullets and the cartoon Billy had great base-running skills and at one point some serious wheels. In '67 he also hit 24 homers and put up a .433 OBA in his last season before being hurt. Billy had a rep as a pretty witty guy and when the Dodgers finally put player names on uniforms in '72 he opined that "with the expense of putting my name on my uniform, there's no way the Dodgers will trade me."

While we have had a good run of west coast guys recently, let's use the Midwest to hook these two up: