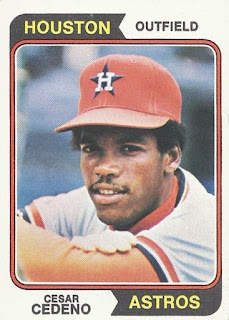 This guy was another of my favorite players. I remember reading an article in a baseball magazine early in Cesar's career which had a photo of him squatting with a huge grin on his face and I was hooked. Here he is a lot more contemplative and he sure had reason to be. On the plus side he is fresh off perhaps his best season, the one that solidified him in '74 as the best young player in the majors. While that designation wouldn't last - too many injuries and perhaps personal demons - when this photo was taken Cesar was on top of the world, or at least on top of the Astrodome. But all was not right in Cesar's world. After the '73 season there were rumors that he killed a guy in a bar fight back in DR. What really happened was that he was in a motel room with his girlfriend - he was married at the time - and as she was fooling around with his gun it went off and she was killed. Cesar fled, turned himself in the next day, spent a few weeks in jail, and eventually had voluntary manslaughter charges against him reduced to involuntary ones.

Cesar Cedeno was a phenom and by 15 he already had an amazing reputation in the States for his ability to play ball in his native Dominican Republic. The Astros got to him first, scooping him up in '67 at age 16 in front of the Cards, among other teams that scouted him. Cesar didn't disappoint, the next year hitting the crap out of the ball in Rookie ball and then turning defensive gems in Single A. In '69 he improved his numbers at the latter level and then in '70 got off to a torrid start in Triple A before being called up to Houston.

With the Astros Cedeno hit .310 in just over half a season and came in fourth in NL ROY voting. The next seven seasons Cesar would have as good a run as anyone playing, averaging .290 with 34 doubles, 18 homers, 51 stolen bases, and 80 RBI's even though he spent a bunch of time hitting from the top of the order. He spread it out, hitting .320 in '72 and '73; leading the league in doubles in '71 and '72; getting 100 RBI's in 74; and becoming only the second guy - after Lou Brock - to hit 20 homers and steal 50 bases in the same season, which he did for three consecutive years. He played a mean defense too, scooping the Gold Glove for center field every year from '72 to '76. He also got four All-Star nods during that time.

Then in '78 Cedeno, a very aggressive outfielder, lost most of the season to both ankle and knee injuries. He was slow coming back and would spend a deal of time at first base in '79, putting up sub-par numbers. In '80 he revived and posted numbers comparable to those in his prime - a .309 average with 32 doubles, 73 RBI's, and 48 stolen bases - in helping Houston to its first division title. But beginning with the playoffs, his numbers tanked a bit and after an uninspired '81 season that saw the Astros return to the post-season, Cesar was sent to the Reds for Ray Knight.

In Cincinnati, Cedeno's career found its new arc as for three-plus seasons he was an above average fielder and average hitter as a mostly regular starter. Due to his leg injuries the stolen base totals crashed and his days as a superlative player were over. His last hurrah came late in '85 when he was traded to the Cards for their pennant drive against the Mets. He was pretty awesome, batting .434 with six homers and 19 RBI's in only 76 at bats. Although he wouldn't have great post-season numbers, he got a game-winner in the Series against KC. He then left as a free agent, was signed and released by Toronto, then signed by LA for whom he got some token at bats in his final season. For his career Cesar hit .285 with 2,087 hits, 436 doubles, 199 homers, 976 RBI's, and 550 stolen bases. In the post-season he hit .173 in 17 games. He is currently ranked in the top 50 all-time for putouts, assists, and double plays in center field.

Cedeno would go on to coach a bunch in Latin and South America, working his way to the minor leagues by the early 2000's. As recently as '09 he was an outfielder coach in the Nationals' system. He had some bad times in the late '80s, getting arrested for drunk driving, assault, and twice for beating his girlfriends. I think it's safe to say he's no longer one of my favorite players. 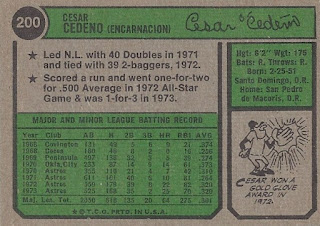 This is a card back for someone who looked like he was headed straight to the Hall. Only 23, Cesar already had over 600 hits, 64 homers, and 148 stolen bases. He's got that extra symbol in his signature and I believe has the longest maiden name thus far in the set. As for the cartoon, he won the Gold Glove in '73 also; I don't know why the Topps guys couldn't be more current.

These guys played for LA but 20 years apart. We hook them up through the AL: