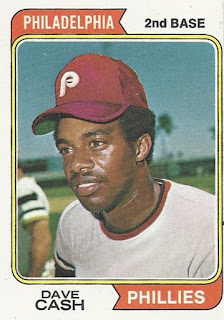 Now we get to another one of the coolest guys in the set, Dave Cash. Dave had it going on, but his card sure doesn't. First off, it's a non-traded Traded card and shows Dave in a Pirates road uniform in spring training that is airbrushed into a Phillies one. Dave had a pretty good '73 but both offensively and defensively it was a bit of a discount to his prior seasons in Pittsburgh. Because of his military obligation, it was tough for Dave to get full-time traction with the Pirates, but that would end when he moved across the state. The script "P" on his hat is quite good but the red on black thing just doesn't work. And Dave is sweating up a storm which makes him all shiny. Finally there is another one of those taped-over arms in the background.

Dave Cash grew up in Utica, NY where he was a high school hoops and baseball star when he was drafted by the Pirates in '66. After a decent start in Rookie ball in which he played primarily shortstop, he hit .335 in his first season of A ball in '67. Another season of A ball followed and then in '69 Pittsburgh was making plans to find a successor for Bill Mazeroski so Dave was moved to second base while at Triple A Columbia. It was there too that he enlisted in the Marines. He would pull a reserve gig so that his two year hitch would be spent doing two weeks a summer and another weekend every month for the next six years. In the meantime he hit .291 in '69 and .279 in a few games up top. After a strong start at Columbus in '70 (.313 with a .400 OBA) he came up for good, spelling Maz at second while hitting .314. That average would get him named to the Topps Rookie team that year.

Cash's military time would make his playing situation a little problematic. While he took over as the starter at second in '71 and did quite well, hitting above .280 the next three seasons, his time away allowed Pittsburgh to give time to Rennie Stennett, another good hit/good field player. But Dave did get plenty of post-season action - he hit .421 against the Giants in the '71 NL series - and was a positive, if quiet, presence in the clubhouse. In '73 he asked out and the Pirates obliged him by trading him to the Phillies for Ken Brett.

In Philadelphia, Cash's career bloomed. He became the for-real regular second baseman - he missed one game in three years - and one of the league's best hitters, averaging over 200 hits in the same time span. He made three successive All-Star teams, led the league once in hits and triples, teamed well with Larry Bowa, and stepped things up in the clubhouse becoming a team leader. He also rarely struck out: in '76 he K'd only 13 times in 727 plate appearances. That same year he returned to the post-season and hit .308 in the NL championships. Dave and the Phillies would be far apart in contract talks - he played without one in '76 and wanted a three year deal with a big increase from the $100K he made in '76 - and so he left for Montreal after the season. His '77 card would be another awful air-brushed one. Dave began his Montreal career pretty much where left off in Philly, but in '78 his average slipped almost 40 points. He would rebound to hit .321 in '79 but by then Rodney Scott had taken over second, Tony Bernazard was in the wings, and Dave would be sent to the Padres for Billy Almon and Dan Briggs. After a season as a semi-regular during which he hit only .227 he would be released, ending his playing career. He hit .283 with 1,571 hits in 1,422 games. In the post-season he hit .236 in 21 games.

After playing, Cash became involved in a business that leased-to-own semi truck cabs that was pretty successful until the '86 tax laws took away the accelerated depreciation deduction that made the business work. He then hooked back up with the Phillies and in '87 began his coaching career as a roving instructor in the minors. He did that for ten years, finishing as Jim Fregosi's first base coach in '96. From there he did minor league managing and coaching in the Baltimore chain for a few years and then moved on to doing the same thing for some independent league teams. He is currently the hitting coach for the Yuma Scorpions. I have inserted an audio interview with him from a couple years ago here. He still has a great voice. 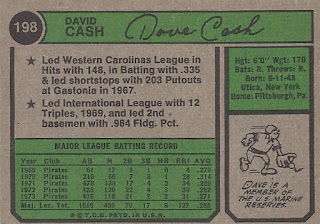 Two more demerits for this card from the back. One is that Dave doesn't even get the little type saying he was traded. Two is that this card is awfully crooked. Dave finished his military hitch by the '74 season which allowed him to play all the time.

Finally an NL hookup and this one is all Padres: