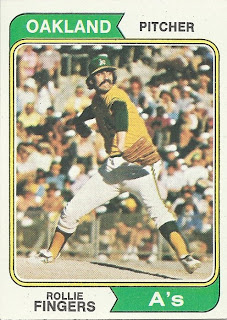 That last post was a killer. I am so happy to just be posting on one guy and this one is a good one. Rollie Fingers is bearing down in what has to be a playoff game given the attendance. Rollie has his game face on and looks like he's throwing heat. Besides a fastball he had an awfully good slider. He also threw a curve and a changeup, but the first two were his money pitches. In '73 Rollie lowered his ERA a ton, got 22 saves and his first All-Star gig, and appeared in nine games after the season, killing a few NY rallies in the Series.

Rollie Fingers was born in Ohio and relocated to Cali as a kid. He was a high school baseball and basketball star like a lot of the taller guys in this set. He was signed by Kansas City late in '64 and spent the next four seasons - '65 through '68 - in Single and Double A as a starter where he had awfully nice stats: a 35-30 record with a 2.78 ERA. After an inning in '68 up top he came up for good in '69 and would repeat the same performance the next couple seasons: start out in the rotation and end up in the bullpen. In '71 he pitched a bunch of innings in a game against the Yankees in relief of Blue Moon Odom, did well, and was on the spot named the team closer by then manager Dick Williams. It would be a good move as Rollie would spend the next decade-plus as one of baseballs premier relievers and certainly the most consistently good one. After averaging just over ten saves a season his first three full years, he would put up 21 in '72 and then throw in nine post-season games as the A's won their first Series since the '30's. In '74 his saves ticked back under 20 but Rollie led the league in games and again had an excellent post-season, appearing in six games. In '75 he won ten, saved 24, again led the AL in games, and despite a not-great playoff vs Boston, came in third in Cy Young voting. '76 was more of the same with a twist. Looking to avoid the loss of pretty much his entire team, owner Charlie O Finley engineered a sale of Rollie at the trading deadline to the Red Sox. It was nullified by Bowie Kuhn "for the good of baseball" and Rollie returned to have probably his best Oakland season: 13 wins, 20 saves, and a 2.47 ERA. At the end of the season he left anyway, going to the Padres as a free agent.

The next two seasons for San Diego were a mixed blessing for Fingers. While he was far away from being with a winner, he ramped up his saves totals huge, getting 35 and 37 his first two seasons while leading the NL both years. '79 would be a bummer year as Rollie fought some nagging injuries, threw 25 fewer innings, and only saved 13. He bounced back in '80, winning 11 with 23 saves and a 2.80 ERA. He also broke Hoyt Wilhelm's then career record for saves during the season. It was his last year with San Diego as he went to the Cards in a big swap - 11 bodies - that saw fellow free agent signee Gene Tenace depart as well.

Right after St. Louis got Fingers they swapped him in another big trade to Milwaukee. '81 would be a the big strike year, but not for Rollie. He would go 6-3 in 47 games, finish 41 of them, grab 28 saves, post a 1.04 ERA, and return to the All-Star game for the first time in three seasons. He also returned to the playoffs, winning one game in a losing cause against the Yankees. For all that he won not only the Cy but the AL MVP as well, becoming the first reliever to pull off that double. Rollie continued rolling in '82, picking up 29 saves by the end of August. He then pulled a muscle in his forearm and was out the rest of the season - and all of '83 - including the Series which the Brewers lost in seven. Tendonitis compounded his arm problems in '83 and pretty much wrecked his career thereafter. Rollie was able to return in '84, save 23, and post a 1.96 ERA in limited use. But '85 was a big downtick and he was released at the end of the season. He finished with a record of 114-118, a 2.90 ERA, four complete games, two shutouts, and 341 saves, a record that would not be broken until '92 by Jeff Reardon. Ironically that was the same year Rollie was elected to the Hall. In the post-season he was 4-4 with a 2.35 ERA and nine saves in 30 games.

Following his career Fingers would work for a couple businesses on the west coast, but his passion was golf, which he played as both an amateur and a professional, on a celebrity golf tour. He has done work in commercials, appearances, and speaking engagements. He just did a commercial for Pepsi with a bunch of other former big leaguers. It is on YouTube. 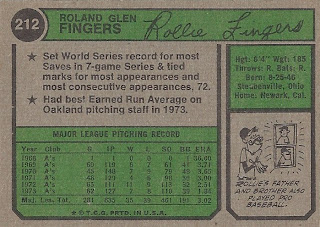 Rollie has excellent star bullets. In '74 he won Series MVP. Neither his brother nor his dad ever made it to the majors. His mustache was obviously a big deal. When Reggie showed up unshaven to spring training in '72 Charlie O decided that since he couldn't get Reggie to shave he would have a contest to see who on his team could grow the best mustache. Rollie went all out with the handlebar and the wax and won the top prize of $300. That was a year's worth of meal money back then.

We get from Rollie to the '73 Cubs pretty quickly: