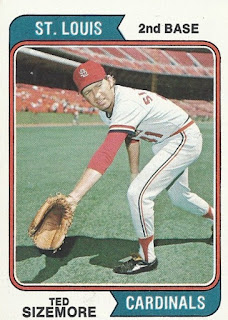 We return to the regular player cards with Ted Sizemore who shows off his backhanded fielding stance at Candlestick. Ted had a pretty good season in '73. Moved to the number two spot behind Lou Brock late in '72 he worked on his bunting skills with coach Harry "The Hat" Walker and saw a significant uptick in his sacrifices from four in '72 to a league-leading 25 in '73. In Keith Hernandez's excellent book "Pure Baseball", in which Keith dissects two games from the '93 season, he mentions that Ted was the best number two hitter he ever saw. Those are some pretty good props.

Ted Sizemore was born in Alabama and moved to Michigan as a kid. There he played baseball and football in high school. He was his school's star fullback which is pretty impressive since Ted only went about 160 pounds back then. He also played in those NABF tournaments I mentioned on Willie Horton's post. After high school Ted went to Michigan where he was an All-Big Ten catcher and seemed to excel defensively since the school's defensive player of the year award is named after him. In the summers Ted played in the Western Canada Basin League (it also included the Dakotas and Montana). He was drafted by the Dodgers in '66 and kicked things off nicely that season in A ball with a .330 average and a .429 OBA. In '67 he moved up to Double A and hit .295. That year, in addition to catching, he put in a bunch of time in the outfield. While LA was real happy with Ted offensively and defensively - he was also a great handler of pitchers - they considered him too small to be a big league catcher and so moved him around. In '68 at Triple A he hit .314 primarily as an outfielder. When '69 rolled around, Ted was ready for LA.

In 1968 the Dodgers were a bit of a disaster in the infield. Wes Parker was still a defensive knockout at first. Jim Lefebvre, an All-Star at second in '66, was out with an injury for two months so Paul Popovich started there. Zoilo Versalles and Bob Bailey were complete flops at shortstop and third base, respectively. Bailey got drafted by Montreal and Lefebvre was moved to third so the Dodgers needed somebody at second. Coach Monty Basgall was assigned to Sizemore to help hm work on his conversion to infield and it worked mighty well. Ted hit .271 and fielded excellently to win the '69 NL Rookie of the Year. In '70 Ted missed about two months of the season - I can't tell if it was to injury or military commitments (probably the former) - but still hit over .300 with an OBA of .367. Going into '71 the Dodgers were desperate for power and had some new young guys skilled at second - notably Bobby Valentine and Lee Lacy - and Ted was sent to St. Louis with Bob Stinson for Dick Allen.

For the Cards, Sizemore took over from longtime vet Julian Javier and made a pretty seamless transition. While his average fell a few points his first couple seasons, he didn't strike out too much, played the new turf pretty well, and was becoming adept at hitting behind runners, which got him elevated in the order behind Brock. In '73 his OBA came back up to .365. In '74 as Lou chased the record, Ted's average and OBA came down pretty hard as he had to take a lot of pitches. '75 was more of the same and in '76 with young Garry Templeton coming up at shortstop, Mike Tyson got pushed over to second, and Ted got pushed back to the west coast, returning to LA for Willie Crawford. There he had a sort of nothing season as he spelled Davey Lopes at second more than expected due to Davey's injuries and slump. LA could tell Ted wasn't happy and that December they sent him to the Phillies for Johnny Oates. In '77 Ted had a big comeback, hitting .281, posting his first OBA above .300 in three seasons, and teaming with Larry Bowa to lead the league in double plays. He also got his first taste of post-season play against his former team. In '78 he jammed his throwing hand early in the season and his stats tumbled pretty hard, although he revived to have a nice playoff series. '79 saw him on the road again, first to the Cubs in the deal that brought Philly Manny Trillo, and then to the Red Sox for Mike O'Berry. For both he posted pretty good upticks from his prior season but did not approach his best numbers. After a partial season off the bench for the Sox in '80, Ted was done. He hit .262 for his career with 188 doubles and a .325 OBA. In the post-season he hit .308 with a .379 OBA in eight games.

In off-seasons Ted did some elementary school teaching. By '84 he was an executive at Rawlings, basically serving as liaison between the company and the leagues. He is now CEO of the Baseball Assistance Team, the non-profit that helps out older former players. 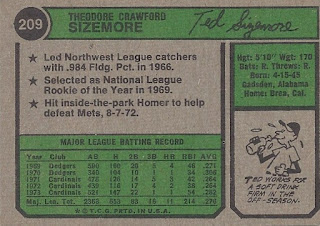 Ted has some decent star bullets and his cartoon references another off-season gig, although I do not know for which beverage maker he worked. He was traded for a guy whose last name was Ted's middle name but I'm not going anywhere with that one. On Ted's scouting report in '68 he was indicated as a Triple A utility player at best. Nice to see those guys be wrong sometimes.

Back to the hookups, Ted gets with Cesar like this: