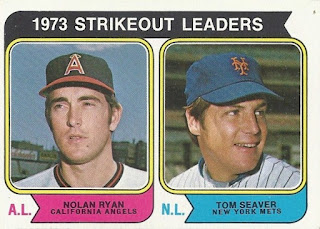 On this card we get some attitude as Nolan Ryan looks a little peeved to be back in NY. But Tom Seaver is still smiling. Were it not for Ron Bryant's blowout season, Tom would have won the pitching Triple Crown in the NL. A couple seasons earlier and this card would have been impossible since these guys were teammates for a while. Nolan should really be smiling also since he is fresh off his record K year and threw two no-hitters. Tom is still in the midst of his record steak of seasons with 200-plus strikeouts. These guys were no strangers to this leader list. 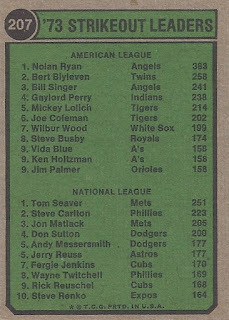 This is one stat list in which the AL finally dominates. We clearly have some premium pitchers here: eight of these pitchers were on the victory leader board; five made the ERA list. Ryan's total kills and he and Bill Singer also set a record in '73 for strikeouts by teammates. Early in his career Bert Blyleven nearly kept pace with Seaver for the consecutive 200-plus strikeout seasons. Gaylord Perry and Mickey Lolich were frequent 200-plus guys as was Joe Coleman while he was with Detroit. Young Steve Busby looked like he would be a regular on this leader board until he got hurt. The rest of these pitchers threw tons of innings.

The NL featured a race that was a little tighter. Steve Carlton probably would have given Seaver more of a run if his confidence wasn't shaken by his lousy start. This would be Jon Matlack's only season with 200-plus. Wayne Twitchell and Steve Renko had their best seasons in '73 by pretty wide margins and were one-timers here. The rest were regulars: Don Sutton thew heat and the other guys were innings hogs. Lots of double representations here - the Mets, Dodgers, Cubs, and Phillies all have two guys on the list. Four pitchers in each league would make the Hall. That ties the homer card with highest representation on the leader cards.
Posted by wobs at 11:59 PM